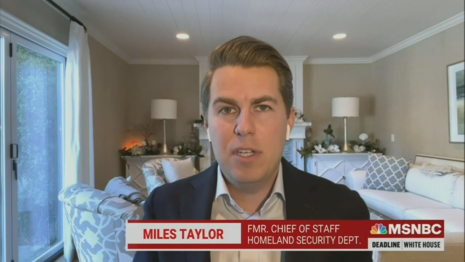 Miles Taylor is one of those Trump-loathing "Republicans" that the liberal media likes to trot out. The sort that can be relied upon to take shots at their supposed fellow party members.

Taylor's the guy who, as "Anonymous," in 2018 wrote an op-ed for the New York Times vaingloriously describing himself as part of the anti-Trump "resistance" inside the White House. At the time, the Times billed Taylor as a "senior" official in the Trump administration. But when the curtain was pulled back, Taylor was revealed to have been at the time of writing the op-ed nothing more than a mere deputy chief of staff at DHS: a "low-level flunkie," as our former colleague Rich Noyes put it.

This was elevated into a book deal as well -- ka-ching. There's gold in those Trump-bashing hills.

Back in September, we caught Taylor on CNN, defending Chairman of the Joint Chiefs of Staff Mark Milley for having promised China to give them advance notice should President Trump order an attack.

Then yesterday, Nicolle Wallace hauled Taylor out on her MSNBC show to attack Republicans in general and Ronny Jackson in particular. Jackson's the former White House physician for both Obama and Trump who is now a Republican congressman from Texas.

Wallace was on the warpath because Jackson suggested that Democrats will use the new Omicron variant as a "Midterm Election Variant," a pretext for loose absentee voting in the 2022 elections.

Taylor knew precisely why Wallace had invited him on the show, and dutifully supplied attacks on Jackson and Republicans at large. After calling Jackson a "two-bit congressman from Texas," Taylor continued:

"I wouldn't trust Ronny Jackson to put a Band-Aid on me . . . Republicans are quite literally murdering their base of support with their disinformation."

Various questions arise around Taylor's truthfulness. Although he describes himself as a Republican, Taylor has admitted to having supported and donated to Barack Obama in his 2008 presidential campaign.

And remember, Obama wasn't running against one of those scary, far-right Republicans. His opponent was John McCain. If you ditched McCain to support Obama—the man with the most liberal voting record in the Senate—it's fair to say you ain't no Republican. Question: if McCain wasn't good enough for Taylor, did he turn around and vote for Trump in 2016—or did he seek and accept a position in his administration under false pretenses?

And then there's the matter of Taylor having flat-out lied about his identity. When CNN's Anderson Cooper interviewed him in 2020, Taylor, who at the time was a paid CNN contributor, denied being Anonymous. When the lie was revealed, CNN said that Taylor would nonetheless "remain a CNN contributor."

But Taylor doesn't mention a CNN affiliation in his Twitter profile, and in his LinkedIn profile, he describes himself as having been a CNN contributor in "2020, less than a year."

Sounds like CNN might have quietly dumped the mendacious Taylor. But the apparent CNN reject is still good enough for the likes of Nicolle Wallace and MSNBC . . . just so long as he's willing to reliably spew colorful anti-Republican attacks.

Perhaps Taylor's best bet would be to slink back into anonymity.

Miles Taylor accusing Republicans of "literally murdering their base of support" was sponsored on MSNBC in part by IHOP, Abbott, Amazon, Verizon, and Apple.

NICOLLE WALLACE: Let's bring into our conversation Miles Taylor, former chief of staff at DHS, and now co-founder and executive director of the Renew America movement.

And I wonder where, I understand the insatiable desire for disinformation. Where does the desire to endanger the lives of their base come from?

MILES TAYLOR: Well, it comes from people who, quite frankly, care a lot more about politics than public health . . . My question is, who in the Republican party are they going to trust on health care? They're certainly not going to listen to any of the career epidemiologists, these non-partisan people we've seen on television, like you just had on in your last segment.

They seem to be listening to the Ronny Jacksons, the two-bit congressman from Texas, who I don't know how he ever got a medical license . . . I mean, I wouldn't trust Ronny Jackson to put a Band-Aid on me.

These voices in the Republican party are a public-safety threat. They are quite literally murdering their base of support with disinformation.