Appearing on CNN's New Day this morning, a Democrat strategist accused Republicans of wanting "to basically turn Florida into a morgue."

But in a mark of just how deep CNN and the Dems have dived into loony-left extremism, the guy, Michael Starr Hopkins, was brought on to represent the centrist wing of the party!

Here's more of the exchange:

Hopkins praised Rep. Hakeem Jeffries' statement criticizing the extreme left of the Democrat party. And Hopkins said it was "extremely problematic" for Squad member Cori Bush to have defended her big spending on private security while calling for the police to be "defunded."

But Hopkins' objection to Bush's "defund" message was only one of form, not substance. He claimed that Bush didn't really mean to defund the police, but merely to put more money in social and mental-health programs, while not "ballooning" spending on police. 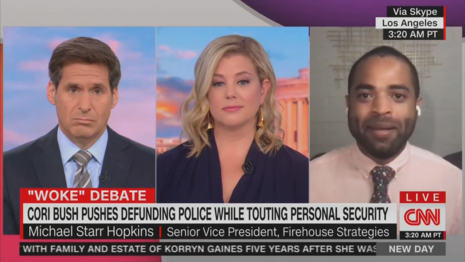 Hopkins fretted that the unwashed masses, or as he put it, "people who aren’t as tuned in" as he is, were being misled by Fox News into thinking that "defund the police" means police won't be there when they call 911.

According to Hopkins, it is therefore necessary to play a "political game," and put the Dems' defund message across in terms more palatable to those Fox-fed rubes.

Predictably, there was no push-back from co-hosts John Berman and Brianna Keilar on Hopkins' outrageous allegation that Republicans "basically want to turn Florida into a morgue." In attacking Florida Republicans, the real target for Hopkins, his fellow Democrats, and the liberal media, is, of course, Republican Governor Ron DeSantis, seen as a real threat to whoever the Dems nominate in 2024.

Note: this isn't the first time a member of the liberal media has accused Republicans of having a death wish for their fellow Americans. Back in 2009, NewsBuster Kyle Drennen caught the late Ed Schultz claiming that "Republicans want to see you dead!"

An ostensibly "centrist" Democrat strategist accusing Republicans of "basically wanting to turn Florida into a morgue" was sponsored in part by Energizer Batteries, T-Mobile, Applebee's, Liberty Mutual, and Sleep Number.

BRIANNA KEILAR: New this morning, Democratic leader Hakeem Jeffries is criticizing liberals who go after more moderate Democrats and accuse them of not doing enough to advance progressive policies. Jeffries told the New York Times, "the extreme left is obsessed with talking trash about mainstream Democrats on Twitter when the majority of the electorate constitutes mainstream Democrats at the polls."

Joining me now to talk about is Democratic strategist and senior vice-president of Firehouse Strategies, Michael Starr Hopkins. Michael, thank you so much for being with us. I just wonder, you know, what do you think about what -- really just about what Jeffries is saying in this statement? Is he right on?

MICHAEL STARR HOPKINS: Hey, thanks for having me. I think Jeffries hit the nail on the head. Look, for every AOC and Cori Bush, there's a Stephanie Murphy and a Conor Lamb who managed to be Democrats and win in a swing district. And when you have the progressive wing of the party attacking the establishment wing of the party, you end up doing the bidding of Republicans.

JOHN BERMAN: You know, the implication about the sniping that Jeffries was specifically referring to there is that there are some people in the center of the Democratic party suggesting that some people on the progressive left are dragging them down. Do you feel like that's a fair characterization?

KEILAR: Let's talk about Cori Bush, who is fresh off what was a big victory for progressives. She actually pushed the Biden administration to extend its moratorium on evictions across the hard-hit Covid areas in the country, which is most of the country. And she's now facing backlash from Republicans because she said this when asked about her use of personal private security.

CORI BUSH: I'm going to make sure I have security because I know I have had attempts on my life. And I have too much work to do, there are too many people that need help right now for me to allow that. So if I end up spending $200,000, if I spend $10 more on it, you know what, I get to be here to do the work. So suck it up. And defunding the police has to happen. We need to defund the police, and put that money into social safety nets.

KEILAR: Republicans are already seizing on this, Michael. How problematic is this for Democrats?

HOPKINS: It's extremely problematic. And look, com--, I understand what she means when she says we need to defund the police. But we need better messaging on that. Because what she really means is instead of spending a ballooning amount of money on police, we need to put more money in social care and to mental health programs.

And when you say things like "defund the police," people who aren't as tuned in everyday don't understand what they mean. And so groups like Fox News and other Republican right-wing talking groups are able to basically flip that and scare people into thinking that they're not going to have police when they call 911, or that they're not going to have people to protect them. And that's a losing message. So we've got to be better than that.