Is there no level of Biden spin that's too pathetic for journalists? Apparently not, given the way Morning Joe opened on Friday with a Tonight Show clip of Biden's weird whispering act of yesterday. Mika Brzezinski found a way to cover for him, literally laughing it off in a loving way. Biden wasn't losing it. It wasn't weird. Not at all! Said Mika: "President Biden was practicing some ASMR, perhaps."

ASMR? That sent this NewsBuster scrambling to Google. Turns out ASMR is an unproven notion that various events, including listening to people whisper, can cause a relaxing reaction in some people.

Whatever. It's going to be a long three-and-a-half years—if Biden lasts that long—of watching the MSM cover for Biden's increasingly bizarre behavior. 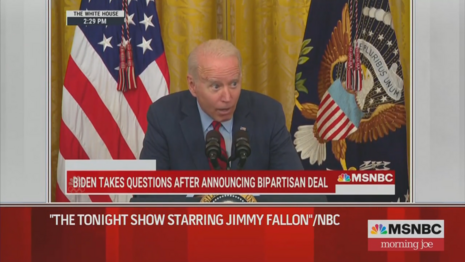 Biden's whispering shtick also reinforced his reputation for inflating his resume. At one point, regarding a bill on the environment, he whispered "I wrote it."

This from a guy who admits his handlers will scold him if he doesn't follow their instructions. And who had to be reminded by President-in-waiting Harris to mention the Miami building-collapse tragedy. Raise your hand if you believe Biden when he says he "wrote" a piece of legislation. Anyone? We'll wait.

JOE BIDEN: And they said, people were waiting for relief. [Whispers] "I got them $1.9 trillion relief, so far." Just remind them, [whispers] "I wrote the bill. On the environment." Employers can’t find workers, I said, yeah, [whispers] "pay them more."

JIMMY FALLON: What? Love it. Wow. He closed by saying, [whispers] “If you build it, they will come.”