Scarborough RIPS MLB Commissioner for Georgia Hypocrisy, But His Guests 'Don't See It' 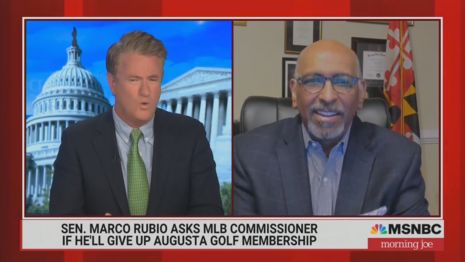 The late, great, Noel Sheppard loved to revel in the "delicious" hypocrisy of liberals. In that spirit, watching baseball commish Rob Manfred get called out for his hypocrisy regarding Georgia's voting rights bill was—almost—as delicious as watching Giancarlo Stanton wallop a 471-foot grand slam for the Yanks.

Manfred had put out a statement yanking the All-Star Game from Atlanta because of Georgia's passage of a voting rights bill. Manfred piously proclaimed: “Major League Baseball fundamentally supports voting rights for all Americans and opposes restrictions to the ballot box."

On Monday, Senator Marco Rubio (R-Fla.)  wrote an open letter to Manfred pointing out the hypocrisy in Manfred's position when he has a membership at the Augusta National Golf Club in Georgia, where The Masters tournament kicks off this weekend.

On today's Morning Joe, Joe Scarborough surprisingly called out Manfred's hypocrisy. Note that Scarborough, intent on maintaining his liberal street cred, prefaced his praise of Rubio by saying, "far be it from me to say positive things about little stunts that Marco Rubio pulls. I think he embarrasses himself a lot." But "In this case, he’s got the MLB Commissioner dead to center. "

But both of Scarborough's liberal-pleasing guests rose to Manfred's defense. Former GOP chairman and Lincoln Project adviser Michael Steele claimed I don’t see it. I think, I think, you know, a business decision versus a personal choice . . . So I think it’s a different dynamic. I get the stunt and I appreciate it. Yeah, you feel like you’ve got him up against a wall. But that’s a personal choice." Manfred doesn't have to worry about the libs: "I don’t think there’s going to be any national pressure or even local pressure in Atlanta for him to do so."

University of Texas professor Victoria Defrancesco Soto agreed with Steele, also hanging her hat on the personal vs. business distinction.  But she also committed a miscue that would surely have been scored an error, speaking as if it were Rubio, not Manfred, who is the Augusta National member!

Liberals letting Manfred off the hook is reminiscent of how they looked the other way about Bill Clinton's long "personal" history of sexual misbehavior, given that his politics were in the right place when it came to supporting abortion. The most notorious example of that was noted by our Chairman, Brent Bozell, who called out former Time reporter Nina Burleigh for saying she would gladly give Bill Clinton oral sex, "just to thank him for keeping abortion legal."

This segment was sponsored in part by Flonase, Lexus, TD Ameritrade, and Safelite.

WILLIE GEIST: Major League baseball has chosen Coors Field in Denver, home of the Colorado Rockies, for the game. It was originally scheduled, as you know, at the Braves home park in Atlanta. But the league on Friday said it would move the game in response to Georgia’s controversial new voting law.

Meanwhile, Senator Marco Rubio of Florida is calling out MLB Commissioner Rob Manfred following the league's decision to move that game out of Atlanta. Senator Rubio sent Manfred a letter yesterday asking whether Manfred plans to give up his membership at the exclusive Augusta National Golf Club, where the Masters is being held this week, because the club is in Georgia . . . He also said the decision wreaks of hypocrisy, Joe.

SCARBOROUGH: Michael Steele, I, far be it from me to say positive things about little stunts that Marco Rubio pulls. I think he embarrasses himself a lot. In this case, he’s got the MLB Commissioner dead to center.

And he’s got him that way, because, oh, oh, you can’t play an All-Star Game in Atlanta, Georgia, because, well, that would be helping the state of Georgia, and you think they’re doing horrible things. And so you want to, you don't, you want to get events out of Georgia. Oh, okay: aren’t you a member of Augusta National? He actually has a pretty good point . . . So should we expect that the Commissioner of Major League bBaseball is going to be giving up his membership at Augusta National?

SCARBOROUGH: But you’ve got to admit, it’s a good point. I mean, you read that letter, you go, checkmate!

STEELE: I, I don’t see it. I don’t see it. I think, I think, you know, a business decision versus a personal choice . . . So I think it’s a different dynamic. I get the stunt and I appreciate it. Yeah, you feel like you’ve got him up against a wall. But that’s a personal choice . . . and at the end of the day, he’s going to say, that’s a personal choice. He may decide to give up his Augusta National membership. But then again, I don’t think there’s going to be any national pressure or even local pressure in Atlanta for him to do so.

SCARBOROUGH: Doesn’t it seem hypocritical of him to keep that membership at Augusta but yank the All-Star Game out of Atlanta when it’s going to hurt middle-class and working-class Georgians?

VICTORIA DeFRANCESCO SOTO: Joe, I think the key here is the separation between the financial interests and the culture war. So I think that when we’re talking about the big corporations that have come into the spotlight because of the Georgia voting bill, it’s very easy to zero in on the MLB, the big corporations, the Delta, the Coca-Cola.

In terms of Augusta, I’m going to agree with Michael Steele here. I do think that Marco Rubio can better frame it as a personal decision. This is not a corporation, this is not part of the culture war. This is something that Marco Rubio is going to try to keep private because he likes going to Augusta. He likes doing that, as do many of these elite folks who get that membership.