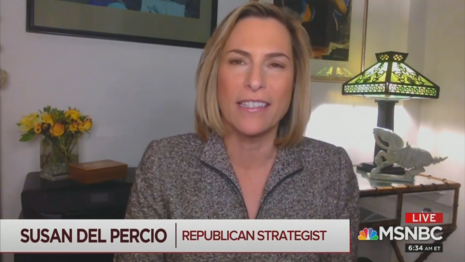 On Morning Joe, so-called "Republican strategist" Susan Del Percio -- who worked as an adviser to Gov. Andrew Cuomo -- was asked to comment on the allegation by New York state Assemblyman Ron Kim that Cuomo threatened him unless he changed his public statement about the Cuomo administration covering up the true numbers on COVID-related nursing home deaths.

Susan Del Percio is a classic "MSNBC Republican": one who sounds much more like a Democrat, a Lincoln Project sympathizer. In the past, we've exposed her:

Her Cuomo experience became relevant this morning. Del Percio was asked to comment on NYC Mayor Bill De Blasio having said on yesterday's Morning Joe that he believes Assemblyman Ron Kim "100%." Kim said that Cuomo threatened him in a phone call, demanding that he retract his statement that he'd overheard a senior Cuomo aide saying they were covering up the number of COVID-related nursing home deaths because they feared an investigation.

"The governor is known to strongarm elected officials. And there's no doubt about that. It's happened for years."

Joe Scarborough commented on the stupidity of Cuomo's move:

"For a guy that’s been in office that long, and grew up around power, that’s an amateur move, to say the least. Forget about being corrupt and possibly criminal. I’m shocked that they'd be that stupid to expose themselves."

MSNBC Republican Susan Del Percio admitting that Andrew Cuomo was known for years to "strongarm" people was sponsored in part by Lincoln and Liberty Mutual.

BILL DE BLASIO: [on Morning Joe yesterday] It’s a sad thing to say, Mika, but that's classic Andrew Cuomo. A lot of people in New York State have received those phone calls. The bullying is nothing new. I believe Ron Kim. And it's very, very sad: no public servant, no person who's telling the truth should be treated that way. But, yeah, the threats, the belittling, the demand that someone change their statement right that moment. Many, many times. I've heard that, and I know a lot of other people in the state have heard that. .

JOE SCARBOROUGH: So you believe Assemblyman Kim, that he was threatened?

MIKA BRZEZINSKI: Wow. That was yesterday on Morning Joe. Mayor Bill de Blasio not mincing words about Governor Cuomo . . . Let’s bring in Albany bureau chief for the New York Times, Jesse McKinley. Also with us Republican strategist and MSNBC political analyst Susan Del Percio, who served as special adviser to Cuomo from 2014 to 2015. Susan, I would just like to ask, starting off, if your experience reflects what Mayor Bill de Blasio was describing in pretty great detail, emphatically.

SUSAN DEL PERCIO: Well, I was a staffer, not an elected official. So, I didn’t have quite that experience. But the governor is known to strongarm elected officials. And there's no doubt about that. It's happened for years.

The difference now, Mika, is that now the state legislature is threatening to take away his emergency powers during this crisis. And since they have a veto-proof majority, they can override the governor. And I think that has him concerned.

SCARBOROUGH: So Jesse, it's, it's one thing to call up a legislator as a governor and strongarm them on a piece of legislation. I would not recommend that. But there are a lot of people who do it. Say, you’re either going to vote with me on this or I'm going to be looking closer at your appropriation. Yeah, that never works. But still, some executives do it.

It’s a completely different thing when you know the Department of Justice is investigating you, and you know the attorney general of your own state may be investigating you, to call members of the state legislature and ask them to lie, when you know all of these investigations are going on. I'm, I’m a bit surprised that, first of all, they would be that devious. But also, for a guy that’s been in office that long, and grew up around power, that’s an amateur move, to say the least. Forget about being corrupt and possibly criminal. I’m shocked that they'd be that stupid to expose themselves.