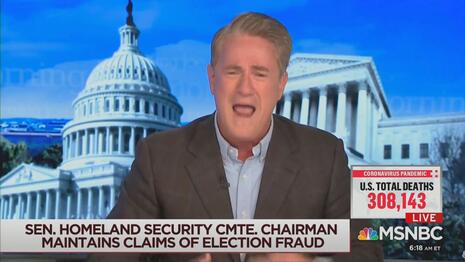 Joe Scarborough went off on another of his patented rants on today's Morning Joe. The object of his ire was Republican Senator Rand Paul of Kentucky. We counted 17 times during the tirade that Scarborough accused Paul of being a "liar," or of "lying."

Poor Joe had been triggered by Paul's comments at a Senate hearing yesterday on election integrity. He said “fraud happened" and "The election in many ways was stolen, and the only way it'll be fixed is by in the future reinforcing the laws."

At the end of the rant, Scarborough bemoaned the fact that senators can't be "sanctioned" for lying. Scarborough didn't specify what sanctions he had in mind. And not that we're agreeing with Scarborough about Rand Paul, but there wouldn't be enough jails in America to hold all the politicians who lie!

No one sanctions the media for their long insistence that voter fraud is nearly non-existent. Luckily, no one sanctions Joe Scarborough for lying about Trump having Mein Kampf at his bedside.

Scarborough's rant was sponsored in part by Neutrogena, Discover, Mazda, and Amazon.

There are no facts that any lawyer would go before a federal judge, and put before that court. Even the most conservative Trump-appointed judges, because they would be sanctioned for lying. I guess it's a shame we don't have sanctions that are levelled against United States senators when they purposely lie to undermine Americans' faith in democracy.