In every election cycle, there's always a state that's been reliably in one party's column for years that the other party talks up the possibility of flipping. For years, Republicans would float their chance to carry the Garden State—but that hope never came to fruition

This time, it's the Biden campaign, with a helping hand from the liberal media, that is suggesting Joe just might carry Texas. Check out the mash-up for a concoction of comments by Morning Joe panelists today. Both in their own right, and passing along "insider" info from the Biden campaign, the theme is that Texas might go blue tonight.

This is quite different from two years ago, when they panicked Beto O'Rourke would lose in Texas by ten points.

Anything's possible, I suppose. But as someone who lived in Texas for most of the last decade, I'd wager a pound of brisket from the Hard Eight BBQ in Stephenville that it's not gonna happen!

Morning Joe floating the notion that Biden can carry Texas was sponsored by Ninja Foodi, Allstate, and Chevrolet. 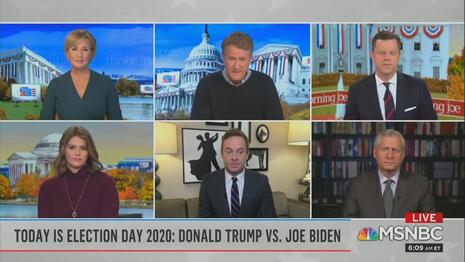 WILLIE GEIST: Hearing from David Plouffe [Dem consultant] and others: don't take your eyes off of Texas.

EUGENE ROBINSON: Tonight, I am going to be watching Texas.

JOHN HEILEMANN: I think, very much, on the basis of everything I know right now, that Texas could very well go blue.

KASIE HUNT: President Trump has a potential real problem in Texas . .  . It really is very much in play.

JOE SCARBOROUGH: That is a message that the Biden campaign sent out very quietly to several people last night: keep an eye on Texas.

JONATHAN LEMIRE: Some senior Democratic strategists have even said: keep an eye on Texas.

ROBINSON: But I will watch Texas. Because it just kind of feels like something's happening there.