Because everyone knows that the commie dictators of China, where the coronavirus originated, would never lie about their case numbers!

There's nothing the liberal media loves more than the latest "grim milestones" about the coronavirus. On Saturday, MSNBC's AM Joy offered a disgusting example of the phenomenon. Guest host Jonathan Capehart had as a guest Laurie Garrett, a "pandemic expert" that our Tim Graham caught back in March telling NPR that "every American should be absolutely outraged" at the Trump administration, and warning "we’re all gonna drop dead."

Today, Garrett trumpeted the supposed fact that yesterday, we had more new coronavirus cases in the United States than the cumulative total of Chinese cases since the virus was first recognized in December.

Capehart was so excited that he had Garrett repeat the statistics. And he slobbered all over her, saying "Good Lord. Laurie, I love watching you and I love having you on." And in ending the segment, Capehart heralded her as a "national treasure."

Gag me with a nasal swab! Capehart and Garrett are the sort that would have credulously lapped up the grain and steel production numbers put out by the Soviet Union back in the day!

Even the New York Times has reported on a CIA investigation into the way that China has "vastly understated the spread of the coronavirus." 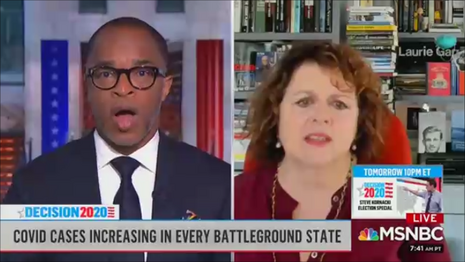 This isn't gullibility on the part of MSNBC. It's a willful decision to put aside any journalistic skepticism in order put the Trump administration in the worst possible light. And if that means uncritically sopping up statistics put out by the Chinese dictators, so be it.

LAURIE GARRETT: Here's a startling little thing to think about. Yesterday, we had more new cases in America reported in total in one 24-hour period than the entire total of cases in China since December. Yesterday we had — let me get the numbers right. 98,583 new cases reported in the United States of America. The total for China, since Christmas, is 91,339 cases.

JONATHAN CAPEHART: Laurie, could you say that again? So we could drive this home for the American people?

GARRETT: In one day, we had more new cases in the United States of America than the cumulative total of Chinese cases since the virus was first recognized in December.

CAPEHART: Good Lord. Laurie, this is one of the reasons why I love watching you and I love having you on. Because you just zero in on the salient issue.

I'm so glad you brought up -- you zeroed in on why the mask is important . . . Laurie Garrett, you’re a national treasure. Thank you so much for coming on, and for breaking it down and putting it in plain language.