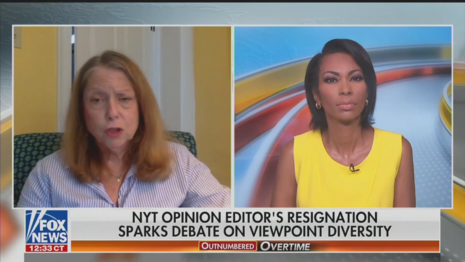 Witness, for example, the recent forced resignation of Editorial Page Editor James Bennet. He had committed the unpardonable sin of publishing a column by Sen. Tom Cotton, [R-AR], who advocated the use of the military, if necessary, to quell the then-raging riots after the death of George Floyd. Bennet's tenure become untenable in in light of a revolt by enraged Times staffers. According to The Hill "Numerous staffers argued that publishing such sentiments endangered the lives [sic] of black journalists at the newspaper."

The most recent evidence of the Times' leftward list came in the resignation earlier this week of op-ed editor Bari Weiss. In her resignation letter, Weiss, a moderate, described the "constant bullying" by her left-wing Times colleagues, having been called among other things a "Nazi and a racist," and criticized for "writing about the Jews again."

Jill Abramson, the former executive editor of the Times, was a guest on Harris Faulkner's Fox News Channel show yesterday. Discussing the Weiss resignation, Abramson began by sloughing off Weiss's resignation as a "molehill," dismissing her as a "junior-level opinion editor."

Abramson then made two absurd assertions:

Either Abramson was being intentionally untruthful, or, having left the Times six years ago, is hopelessly out of touch with the paper's sad state.

To be generous, perhaps there is something to be said for Abramson's claim that the the paper is not edited by a left-wing cabal. The members of the editorial board seem to have largely lost control of the paper, intimidated by a woke mob of relatively junior staffers.

Note: Faulkner demonstrated that she can more than hold her own with the likes of Abramson. At the end of the interview, Abramson said that since Weiss has "thrown some punches" on Twitter, she's likewise "gotta be ready to take it." Shot back Faulkner: "actually, legally, we don't have to be ready to take harassment on the job. That's already established by the law." Score one for Harris!

HARRIS FAULKNER: There is new reaction after a very public resignation by a New York Times opinion editor. In a letter to the Times' publisher, Bari Weiss wrote she was bullied by colleagues intolerant of centrist or conservative viewpoints . . . Jill Abramson is with me now, the former executive editor of the New York Times.

FAULKNER: So you think this woman was lying when she said she was bullied?

ABRAMSON: No, I regret, of course, if anyone is bullied--that's terrible. But I don't think it's true that moderate voices are being hushed at the New York Times. Most of the opinion columnists at the Times are centrists. They're center to liberal . . . But Bari Weiss is someone that has thousands of Twitter followers herself. She's been in there on Twitter, throwing some punches herself at people she disagrees with. I'm not saying she's a bully, but, you know, if you're going to dish it out you gotta be ready to take it. I learned that a long time ago.

FAULKNER: Well actually, legally, we don't have to be ready to take harassment on the job. That's already established by the law."