On today's Morning Joe, Washington Post columnist Eugene Robinson said "it’s hard to convince me that there’s not systemic racism in our policing" given that Dylann Roof, the white killer of nine black people in a Charleston church, was taken alive, whereas Rayshard Brooks was killed in Atlanta in the course of his arrest.

But have a look at this news article which includes video of Roof's arrest, and states, "the video confirms the Shelby police department’s account that Roof surrendered meekly after he was approached by officers."

In the video, you can see that Roof calmly pulls his car off the road and stops when the police car approaches. Officers then approach the car with guns drawn and aimed at Roof. If he had made a false move, they appeared ready to fire. You can see the officers relax after the one officer approaches the car window, and Roof was calm and cooperative. He soon exits the car, and appearing relaxed, places his hands on the roof of the car.

In contrast. Rayshard Brooks resisted arrest, fought with the officers, grabbed one's taser and fired it at them. Whether those facts justify the shooting of Brooks remains to be seen. But the circumstances surrounding the two arrests were markedly different. 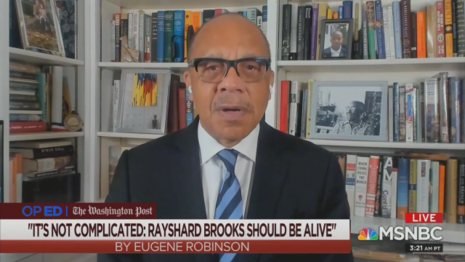 And yes, it's true as Robinson says, that Roof lived to stand trial. But at that trial he was sentenced to death. And though the wheels of justice grind slowly, it's likely that he will eventually be executed.

Robinson's comments dovetail with a Washington Post column he's written on the Brooks case, in which he says, "it's not complicated," and that the officers in the Brooks case were clearly culpable. What's astounding is that the normally mild-mannered Robinson concluded his column this way [emphasis added]:

"As long as there is no justice, there must be no peace."

So, far from urging peaceful demonstrations, Robinson is demanding non-peaceful ones, virtually calling for violence. Amazing.

EUGENE ROBINSON: De-escalation techniques: you know, this is not rocket science.

ROBINSON: You remember Dylann Roof, who killed nine people in Mother Emmanuel Church, armed and more dangerous than you can imagine, somehow manages to get captured alive, and then they take him to Burger King and he lives to stand trial. And yet, Rayshard Brooks is dead. And so it’s hard to convince me that there’s not systemic racism in our policing.It’s hard to convince me that something terribly, terribly wrong didn't happen last Friday night.