With the economic crisis at an all-time high and Biden’s approval ratings are at an all-time low, everyone knows that it looks like the incompetent Biden administration’s fault. But that is not stopping his cheerleaders on Morning Joe from continuing to take the President’s side.

“You don't know what's around the next corner. Sometimes, a crisis comes that you didn’t expect. It always does, in fact, if you’re president of the United States—but in this case with inflation and everything else that's piling up” says host Willie Geist. “It's just not clear how he gets around that next corner.”

Mara Gay of The New York Times Editorial Board also had something to say about the poor man who currently sits in the Oval Office. She thinks that there is “some kind of disconnect between the messaging from the White House,” believing that communication between the people is the issue, not the people themselves.

Gay continued to call him the “Emphasizer-in-Chief” and that there seems to be a lot of “chaos” in the White House which makes the job hard for him. She even went as far to say the problem is the fact that Biden came into office “in the middle of a once-in-a-lifetime pandemic, on the heels of a president that trafficked in white supremacy and extremism.” 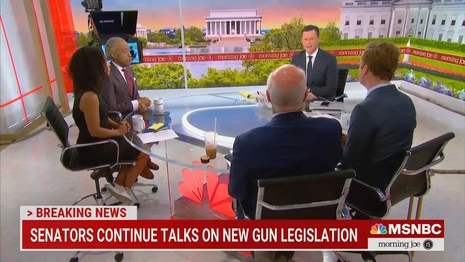 Morning Joe regular Mike Barnicle even chimed in by blaming the Republicans for freaking out during the pandemic regarding vaccines and called Trump “leader of that political party actually going around -- up until this particular day, undermining the fundamentals of this democracy. Everything is rigged, the election was rigged, they should put me back in the White House.” According to Barnicle, that is one of the things that Biden has to continue to deal with.

Jonathan Lemire, Politico’s White House bureau chief, also said his piece, mostly calling out the Republican Party for not being "good-faith actors" (what else is new?). After taking a turn in this constant blame-game, he asked guest Rev. Al Sharpton about the amount of black staffers leaving the White House asking him, “What is your sense of that?”

Sharpton, host of MSNBC’s PoliticsNation, droned on and on when answering Lemire’s question, praising Biden’s administration record of diversity, and insisted that no one's left with a grand denunciation, like "where Omarosa left Donald Trump and called him racist and a bigot and wrote a book." He called Biden “passionate and committed,” and instead of the staff pushing the president, it is now the other way around. Sharpton expressed that it may be hard for staff to keep up as a result.

In addition to that, Sharpton talked about his contact with the White House that has spanned on for “three or four presidents,” bragging that he never visited Donald Trump but that they “did talk on the phone.” A possible (failed) attempt to throw his dislike for the former president in viewer’s faces without explicitly doing so.

Sharpton still praised Biden even though they don’t always agree. He even gave the example of when he fought Biden on the crime bill back in the ‘90s. Sharpton concluded that he will still “give him credit on where I think earns it.”

America is dealing with numerous crises right now, and Biden is STILL getting praised? That’s what the liberal media is for.

WILLIE GEIST: Mara, this is the job, isn't it? The president of the United States, you don't know what's around the next corner. Sometimes, a crisis comes that you didn’t expect. It always does, in fact, if you’re president of the United States—but in this case with inflation and everything else that's piling up. It's just not clear how he gets around that next corner.

MARA GAY: There seems to be some kind of disconnect between the messaging from the White House which sometimes is the right message, but maybe not loud enough or urgent enough or not big enough and what the American people are feeling.

And you know, I think the president is known kind of as the Emphathizer-in-Chief. I don't know if it's a personal problem, and it does lead you to wonder what kind of staff situation may be at hand in the White House. Some kind of chaos, there are a lot of stories as well about what's going on with the Vice President, her staff, so there's a lot of questions about why that disconnect is happening.

But I also just have to say, coming into this job, yes, it's true, you could never prepare. I don't want the job of president. It's a tough job. But we seem to be in a series of crises. And, you know, the President came in-- in the middle of a one in a lifetime pandemic, on the heels of a president that trafficked in white supremacy and extremism. So, I think the writing was on the wall to kind of come in with urgency, and we don't always see that from the White House, even though I think the president understands. It's not getting through.

MIKE BARNICLE: The interesting thing to your point is he becomes president of the United States. And as you pointed out, we're in a pandemic. People are dying globally to a virus. And this country suddenly seizes upon the fact that he has one political party, the Republican Party saying don't take the virus -- don't get the vaccine.

Don't get the vaccine.

And you get the leader of that political party actually going around -- up until this particular day, undermining the fundamentals of this democracy. Everything is rigged, the election was rigged, they should put me back in the White House. So that's one of the things he's got to deal with but it's a huge cloud that hangs over the Republic.

LEMIRE: Well, there's that. This White House is also dealing with problems where they're not just -- not just not dealing with the good-faith actors, which is in this case the Republican Party, but their best efforts, because of the breakdown in the Senate can’t go anywhere necessarily whether on guns or on voting rights.

But Rev, I want to return to the idea about staff for a minute, my colleagues at Politico had a story earlier this week about the significant number of African-American staffers who have departed the White House, expressing frustration that their roads to advancement have been blocked.

The White House has pushed back on this. But my colleagues have spoken to a number of people who say, we felt like we were not getting a fair shake here, our voices were not heard within this administration. What is your sense of that?

REV. AL SHARPTON: Let me say this, not only do I give credit to this administration for the two you named. He has the first black secretary of defense. We've never had a black over the Pentagon, I mean and Marcia Fudge, I mean, his cabinet. So, at the top level, you have not had as many blacks as empowered as we've seen with this administration.

And I think one of the things – and I read the piece you referred to – is yes, with Cedric Richmond leaving because of the concern about the midterm election you do have people like Susan Rice who no one can question who’s over domestic policy. And people on staff like Trey Baker who has won the confidence of a lot of us in the civil rights community.

What you have not seen with some of the blacks that have left, is the Omarosa habit where Omarosa left Donald Trump and called him racist and a bigot and wrote a book. So, you don’t see any of that. I think that there has been some staff turnover, but I think that the access to this administration and working with them has not in any way been abated. But I do think that they should be conscious of what some of the staff members said.

And addressing the point on staffing, what I found and I have had access to the last three or four presidents. Although I wouldn't visit Donald Trump, we did talk on the phone. I’ve not – I think the problem is not the staffing of being -- I've seen the staff have to push the president. In this case, I see a president pushing the staff. I think Biden is more passionate and committed than a lot of them can keep up with, and the same with Kamala Harris.

Sometimes, when you have a leader that's saying let's go and you have people that want to weigh everything politically, when you have a leader that’s saying we're going to do this anyway because it's the right thing to do, therein lies some of the problem. But I really think, and we've had our days we disagree, you know in the '90s, I fought Biden on the crime bill. But I've not seen anyone more passionate on a lot of these things than Joe Biden.

And I think Biden himself fought to get this executive order that he signed last week around policing. When some of the staff was saying should we wait until after the midterms, so I think it's a question of the staff keeping up with the president in this case. Doesn't mean I'm going to agree with him on everything. But I’m going to give him credit on where I think earns it.