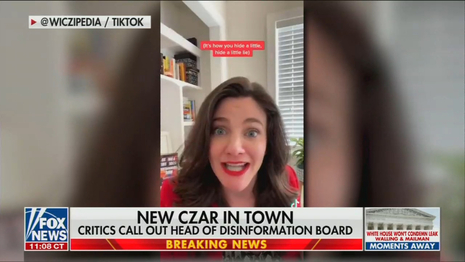 On Thursday, Townhall’s managing editor Spencer Brown reported: “Following the circulation of cringey videos and disproven tweets posted by Nina Jankowicz, the head of DHS’s new ‘Disinformation Governance Board,’ a video of public remarks Jankowicz delivered in 2021 gives Americans another idea of what sort of speech Biden’s so-called Minister of Truth may look to stifle when it comes to expression that’s inconvenient for Democrats.”

He specifically pointed to her speaking to “the City Club of Cleveland’s annual meeting, delivering an address titled ‘Disinformation and Democracy: Civic Discourse in the Digital Age.’” During that speech, Jankowicz ranted: “Critical Race Theory has become one of those hot-button issues that the Republicans and other, you know, ‘disinformers’ who are engaged in disinformation for profit, frankly — there are plenty of, you know, media outlets that are making money off of this too — have seized on.”