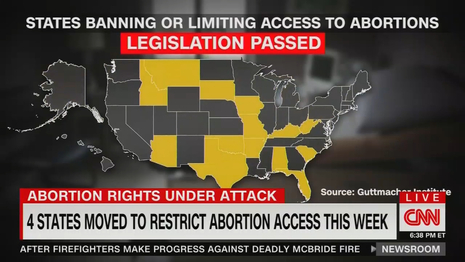 On Thursday, Fox News Digital associate editor Kristine Parks reported: “The country is sharply divided on the issue of abortion, but the majority of Americans support at least some restrictions on abortion, particularly past the first trimester. However, the media consistently takes sides on the abortion debate by framing stories with pro-choice language.” She pointed out: “While framing laws restricting abortion as dangerous to women, outlets like The Washington Post and CNN praised abortion advocates and companies for providing ‘abortion care.’”

“‘Very rarely, if ever, is the reality of what happens in an abortion discussed [by the media],’ Dr. Christina Francis, a pro-life OB/GYN told Fox News Digital,” Parks noted. She then further cited the doctor completely dismantling the left-wing media narrative on the topic:

Instead, they use “unrealistic and euphemistic terms in order to disguise” the “reality of the situation,” she claimed.

“In fact, the word ‘abortion’ is often not even used. Instead, they say ‘reproductive healthcare,’ ‘reproductive rights’ or ‘reproductive justice.’  Abortion is a violent procedure that interrupts the natural process of pregnancy with a single intent – to end the life of a developing human being,” Dr. Francis added.