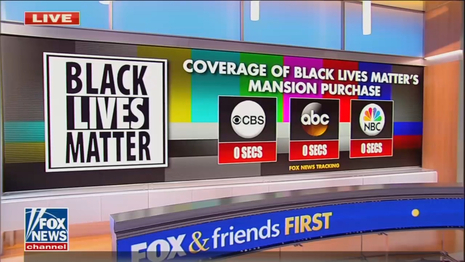 On Tuesday, Fox News Digital media reporter Joseph A. Wulfsohn reported: “The three broadcast networks are turning a blind eye towards a growing scandal plaguing the Black Lives Matter organization.” He pointed to “A stunning report from New York Magazine last week revealed that the Black Lives Matter Global Network Foundation had bought a 6,500-square-foot mansion in southern California with cash in October 2020, following months of the civil unrest sparked by the murder of George Floyd.”

Wulfsohn noted that despite the fact that “GOP lawmakers have begun calling on the Justice Department to investigate the politically powerful nonprofit,” the liberal broadcast networks of “ABC, CBS and NBC have not addressed the brewing controversy on their morning or evening newscasts since the story broke last Wednesday, according to Grabien transcripts.”