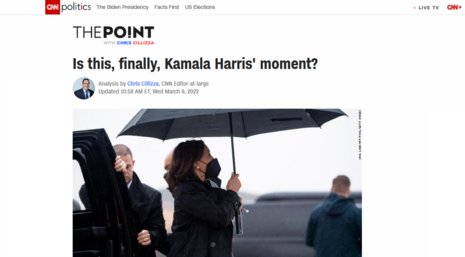 On Wednesday, RedState’s Mike Miller reported on CNN politics reporter Chris Cillizza laughably asking if the war in Ukraine was “finally” a “moment” for Vice President Kamala Harris. “If at first, you don’t succeed, make a COMPLETE fool out of yourself. My advice? No. The advice of CNN politics reporter Chris Cillizza? Oh hell, yeah. Or so it would appear,” Miller observed.

He pointed out how Cillizza’s swooning over Harris came following last week’s “delusional article in which he asked, presumably with a straight face: ‘Is this the beginning of a Joe Biden Comeback?’” As Miller mocked the CNN reporter’s desperate attempt to manifest a political comeback for the flailing Biden administration, he quoted this line from Cillizza: “Harris badly needs a moment to show that she could step into the top job. Those moments don’t come along very often, but this week’s trip [to Europe] is very much one of them.”

Read the full article at RedState.