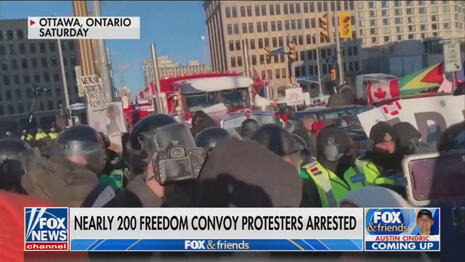 On Saturday, Twitchy writer Greg Pollowitz reported on a vile editorial published in The Washington Post last week that attempted to hurl a racial smear at the Canadian trucker Freedom Convoy. “According to this op-ed in the Washington Post, the Freedom Convoy protest over mask mandates in Canada is about white supremacy,” he noted before highlighting conservative Twitter blasting the article.

The social media reaction focused on this key quote from the nasty piece: “The belief that one’s entitlement to freedom is a key component of White supremacy.” Pollowitz observed: “Anyway, this is getting ridiculous that everything libs don’t like is white supremacy....But that does fit with their world beliefs....Maybe we should just take libs at their word and admit that they REALLY believe this.”