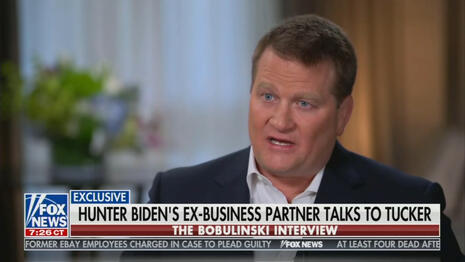 Even after Hunter Biden business associate Tony Bobulinski sat down for a hour-long Fox News interview Tuesday night in which he provided credible evidence corroborating his claims about Joe Biden’s involvement in his son’s corrupt foreign business dealings, on Wednesday, the NBC, ABC, and CBS morning shows couldn’t be bothered to cover the bombshell bad news for the Democratic nominee.

A Media Research Center study released on Tuesday found that the Big Three broadcast networks have only offered a pathetic 21 minutes to the growing Biden scandal since the story broke on the front page of The New York Post on October 14. That’s 21 minutes out of 113 hours worth of morning an evening shows over the past week and most of that paltry coverage was devoted to attempts to falsely claim the story was “Russian disinformation.”

After Bobulinski held a press conference before Thursday’s final presidential debate, in which he detailed corruption allegations against the entire Biden family, including Joe Biden, on Friday morning, the broadcast networks completely censored the major development. Instead, any mention of the scandal was in the context of NBC, ABC, and CBS reporters cheering how Biden was supposedly “on offense” during the debate after President Trump “went personal” by demanding answers about Hunter’s shady deals in Ukraine and China.

Amazingly, even when NBC’s Today show had the perfect opportunity to segue to the Biden scandal Wednesday morning, the broadcast refused. During a report in the 7:30 a.m. ET half hour about tech company CEOs set to testify before Congress – largely in response to Republican questions about why social media platforms have actively tried to squash stories about Hunter’s emails – correspondent Jo Ling Kent managed to not bring up the scandal once:

The CEOs of Facebook, Twitter, and Google will testify before Congress remotely yet again. This time called before the stand because lawmakers are concerned about how they moderate the content that you see. We’re expecting some major fireworks over how they’re platforms are handling the lead-up to Election Day and beyond.

She never elaborated on what “content” was being censored or why.

The segment at least acknowledged some general complaints about big tech from conservatives:

KENT: On the other side, 28-year-old Molly Theiling feels Facebook is biased. Some of her posts about coronavirus theories and hydroxychloroquine have been either flagged as false by the company or taken down.

MOLLY THEILING: I was shocked. I couldn’t believe it. I think when it comes to an election, it’s important to have both sides.

THEILING: I feel like they’re a little more left leaning. You have to trust the public to be able to like inform themselves and make their own opinions.

KENT: Facebook has consistently denied any bias against any political group, including conservatives. And it maintains, Mark Zuckerberg included, that it is nonpartisan.

The leftist media are so deep in the tank for the Democratic Party that so-called “journalists” are spending the final days leading up to the presidential election trying to silence any news that could be damaging to the Biden campaign. They feel they must prevent another 2016 result at all costs.

Obviously the non-coverage did not have any advertisers, but you can fight back against the media by contacting their top sponsors and letting them know what you think of the routine left-wing bias these outlets provide.