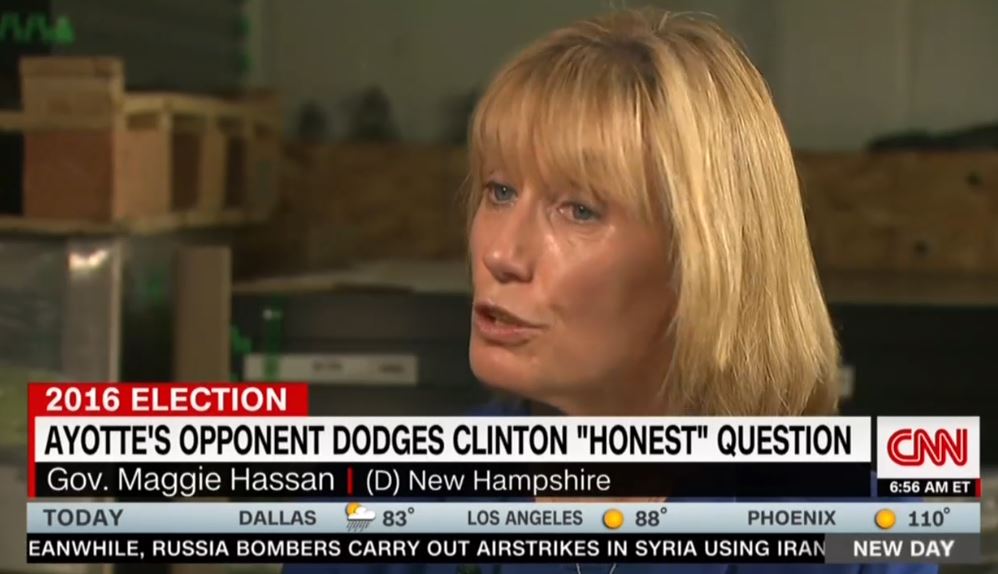 In a recent interview with CNN senior political correspondent Manu Raju, New Hampshire Governor and Democratic Senate candidate Maggie Hassan repeatedly dodged questions about whether Hillary Clinton was “honest” and refused to vouch for Clinton’s credibility. Despite the embarrassing exchange making news on cable, the broadcast networks of NBC, ABC, and CBS all ignored the story.

In the sit-down with Hassan, aired on Tuesday’s New Day, Raju noted: “64% of voters in a recent CNN/ORC poll believe Clinton is not honest or trustworthy, and asked three times, Hassan would not give her opinion.”

Later in the 11 a.m. ET hour that day, MSNBC noticed the obvious stumble. Anchor Steve Kornacki remarked: “Maggie Hassan, the state’s Democratic Governor, Democratic candidate for the Senate, was asked a simple question, ‘Do you think Hillary Clinton is honest and trustworthy?’ This is what happened.”

After a clip played of Hassen talking to CNN, even Clinton superfan Andrea Mitchell was shocked: “Wow, I hadn’t seen that, Steve.” Kornacki replied: “That’s the effect on the ground. This is the issue that still won’t really go away for Hillary Clinton.”

None of the network evening newscasts Tuesday night nor any of Wednesday’s morning shows made any mention of the gaffe.