Speculating over Hillary Clinton’s vice presidential running mate on Friday, NBC’s Today fretted that the leading contender – Virginia Senator Tim Kaine – might be too moderate for the left-wing base of the Democratic Party. In a report on the topic, correspondent Kristen Welker noted: “A former governor who also has national security experience, Kaine has emerged as the frontrunner. Some progressives have accused him of being too pro-trade and soft on Wall Street, but supporters say he checks all the boxes.”

Turning to Meet the Press moderator Chuck Todd after the story, co-host Matt Lauer wondered: “But is there a headline-grabbing candidate in the mix we just heard?” Todd observed: “I think the only way – well, if it's not Tim Kaine, it’ll be a headline-grabbing moment because a lot of us assume it is going to be Tim Kaine. It would be a shock if it's not.”

...if she doesn't go Kaine, I think she is gonna go Cory Booker or Tom Perez, because it means that they’ve decided, you know what, they need to excite all parts of the Democratic coalition. They don't want to risk making – you know, the left is – some uneasiness with Kaine, wishing he’s too – thinking he’s too centrist.

Despite the concerns from Welker and Todd, the American Conservative Union has given Kaine a zero rating for his three years in the Senate. By contrast, socialist Vermont Senator Bernie Sanders received a lifetime rating of 6.31.

Here is a full transcript of Welker’s July 22 report: 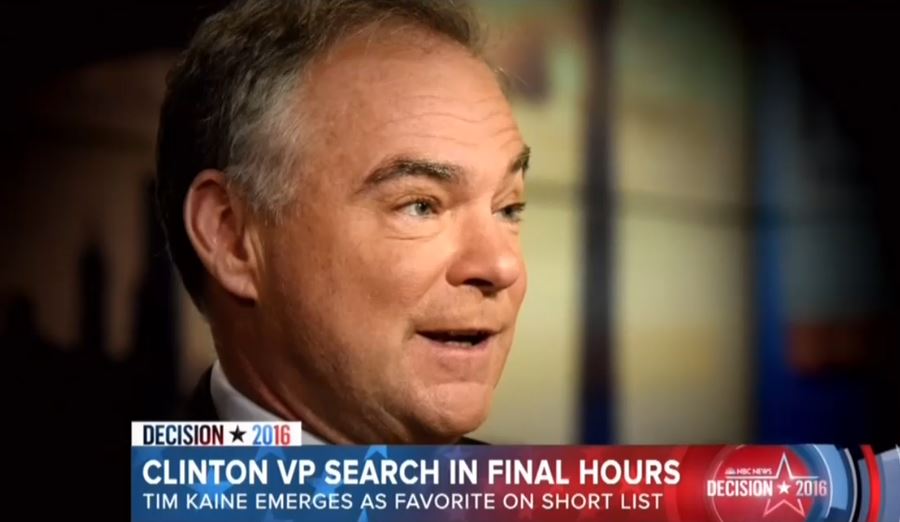 SAVANNAH GUTHRIE: They [the Democrats] will be the center of the political universe next week. They’ll be in Philadelphia for their convention. And you’re looking live as the stage is set there. The podium revealed. Big week for Democrats next week. NBC’s Kristen Welker joins us with more on that, including a possible VP pick. It could come as early as the next few hours, Kristen.

KRISTEN WELKER: That’s right, it could, Savannah. Good morning to you. We could learn Hillary Clinton's VP pick anytime today, she’ll campaign here in Florida. Now, my sources are telling me all signs are still pointing to Virginia Senator Tim Kaine, but with a lot of names still in the mix, Clinton could pull off a big surprise.

WELKER: With the search for Hillary Clinton's VP pick in its final hours, the buzz is mounting about Virginia Senator Tim Kaine today.

TIM KAINE: Are we ready for Hillary?

WELKER: A former governor who also has national security experience, Kaine has emerged as the frontrunner. Some progressives have accused him of being too pro-trade and soft on Wall Street, but supporters say he checks all the boxes. On Thursday, Kaine kept his cards close to the vest.

KAINE: I'm a happy senator and I’m not looking for another job.

WELKER: But there are other big names in the running, including Agriculture Secretary Tom Vilsack, a longtime friend of the Clintons who served as Iowa’s former governor, Vilsack could help deliver that critical swing state. He deflected questions about the topic during a roundtable addressing opioid abuse on Thursday.

TOM VILSACK: I'm here in my official capacity to talk about an issue that I care deeply about.

WELKER: Still, there are questions about Vilsack’s ability to rally young and minority voters. That could be a strength for another top contender, New Jersey Senator Cory Booker. Booker has a relatively thin resume.

CORY BOOKER: With Hillary Clinton, we will rise!

WELKER: But is known for his impassioned rhetoric and bold thinking as Newark's former mayor. On Thursday, Kate Snow pressed Booker about whether he plans to campaign with Clinton in Florida today.

KATE SNOW: Florida’s not on the agenda?

BOOKER: No, Florida’s not on the agenda.

ELIZABETH WARREN: Let's be really, really clear. Donald Trump does not have the answers.

WELKER: The Clinton campaign hoping to grab headlines with the announcement, now that the Republican convention is over and all eyes are on Philadelphia, where it's the Democrats' turn to take the stage.

And Clinton's main goal at her convention will be to counter some of the attacks leveled at her this past week. Also, she’s going to try and win over those all-important undecided and independent voters. Matt, Savannah, back to you.

GUTHRIE: Alright, Kristen Welker in Orlando this morning, thank you.