NBC’s Lauer to Dan Quayle: ‘People Worried’ About Your ‘Qualifications’ as VP

During an interview with Dan Quayle on Thursday’s NBC Today, co-host Matt Lauer reminded the former Republican vice president of the liberal media narrative that he was unqualified for the job: “And in all honesty, your qualifications were questioned when you became vice president. People worried whether you had the experience to be vice president or president, if that would happen.”

From the moment George H.W. Bush named Quayle as his running mate in August of 1988, the press savaged the then-Indiana Senator and repeatedly declared him unfit for office:

“Did he or did he not at the height of the Vietnam War get the kind of help not available to many young men of his age in order to join the National Guard? Did he evade the draft to avoid Vietnam or did he fulfill his military service in an honorable way?”
– Peter Jennings in opening ABC’s World News Tonight on August 18, 1988

“Quayle and his supporters throw a protective arm around the National Guard as though the institution itself were under attack. It, of course, is not. He and his apparent mediocrity and hypocrisy are.”
– Ted Koppel, ABC’s Nightline, August 23

“So now a young man who got a long way in life on the kindness and power of family and friends must now convince voters he is qualified to be Vice President, only a step away from the presidency.”
– Correspondent John Martin on ABC’s World News Tonight, August 24

“His academic record is mediocre, his memory (just how did he get into the National Guard?) is mediocre, his honesty (he fudged his resume) is mediocre, and his judgment (who would go off on a golfing weekend, however innocent, with two pals and a female lobbyist?) is mediocre.”
– NBC News president Michael Gartner in a September 1 op/ed in The Wall Street Journal

“We try to report objectively, and so I’m a little reluctant to say it: I find it very difficult to believe that eventually, conceivably, Dan Quayle would sit down and negotiate with Mikhail Gorbachev. It doesn’t seem to make sense.”
– CBS’s Mike Wallace on NBC’s Late Night with David Letterman, October 6

On Thursday, Lauer used the attack line as a segue to question the qualifications of presumptive GOP nominee Donald Trump: “Do you think Donald Trump has the experience, the knowledge, and the temperament to be president?” Minutes later, referring to Hillary Clinton, Lauer pressed: “Is he as qualified as she is?”

Fellow co-host Savannah Guthrie wondered: “Simple question, should he turn over his tax returns?” Quayle replied: “He's not going to do that.” Guthrie continued: “I know, but should he? Every presidential candidate going back decades has done so.” Quayle explained: “I mean, let me just give you a little news flash here, this is going to be different. He's a different candidate, it's going to be a different campaign, so stay tuned. Just remember this, expect the unexpected.”

Here is a full transcript of the May 12 exchange:

MATT LAUER: With us now exclusively, former Vice President Dan Quayle. Mr. Vice President, it's great to see you. We haven't seen you in a while.

DAN QUAYLE: It's been a while.

QUAYLE: Good to be back, thank you.

LAUER: So bring us up to date here. When all of this started a year or so ago, those 17 GOP candidates standing on that stage, could you have imagined, with governors and senators in that group, that it would end up with Donald Trump, inexperienced businessman real estate mogul, capturing the Republican nomination?

QUAYLE: No. And I don't think very many people did except himself, his family. There’s a few people who said “watch Donald Trump,” but I don't think anybody expected him to win the nomination. And quite frankly, I'm not quite sure that he really thought that he could win. But he's a winner. He knocked off 16 Republican candidates. He is going to be the nominee, is the presumptive nominee, and now the party’s going to have to unify around someone that they did not expect to be their nominee.

SAVANNAH GUTHRIE: Obviously this candidacy of Donald Trump has exposed some fault lines in the Republican Party and there are some people who call themselves “Never Trumpers,” and then there are some who are on the “Trump Train.” Which category do you fall into?

QUAYLE: Well, look, I was the Republican vice president. I've been a Republican all my life. I'm going to support the nominee. And I predict that most people in my position or people that have been in the Republican Party for a long time, will rally around the nominee. I fully expect that Paul Ryan will eventually support Donald Trump publicly. I hope that happens, because we do have to be unified. If we're not unified, then we have a real lot of trouble at stake. 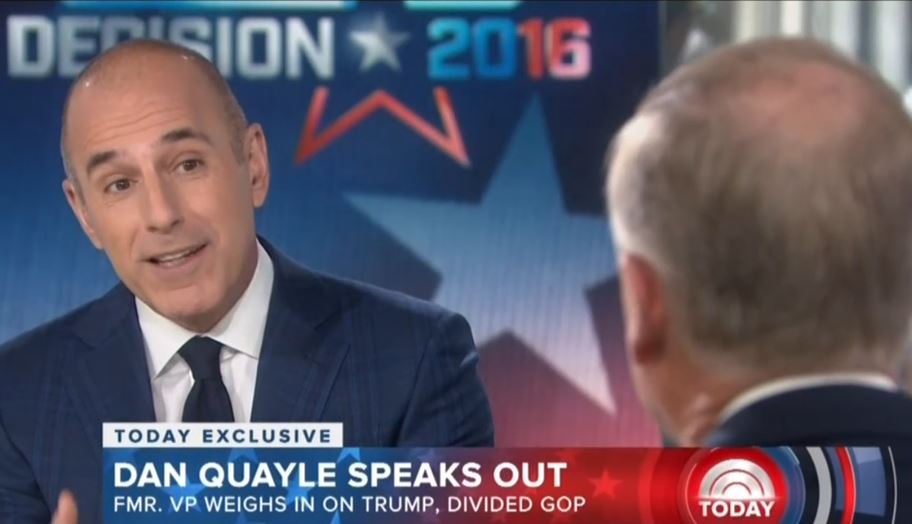 QUAYLE: We're gonna find out. Because –

LAUER: Right now do you think, though?

QUAYLE: Right now, he's the nominee. There's a great – not a majority, a plurality in the Republican Party that clearly believes that. I believe he has the capability to be President of the United States. And he's into a new phase now. He's gotten through the nomination. That's one. And quite frankly, the nomination is a much lower bar than being the nominee. Now he's got to show the American people not that he can beat other Republicans, but he's got to build upon his base, he's got to move forward, and he's got to articulate a vision that the American people say, “Yes, he is qualified.”

I don't know what the answer is to that for most of the people, but clearly he's got good political instincts, he has a good business background, he's a winner, and he's unusual. He's obviously very different. He's not going to play by the rules. It's a different situation, but I think that he can win.

GUTHRIE: Is there anything about how he's conducted the race so far, in terms of tone and temperament, that gives you pause or gives you concern? Or if you had him sitting across from you, you’d say, “You know what? Maybe not do it that way.”

LAUER: He spoke yesterday and said, “By the way, don't expect me to become a different person.” He said he has a mandate from his followers to run a fiery outsider’s campaign. It doesn't sound like he's gonna do what you're suggesting he should do.

QUAYLE: Well, he can run that fiery outsider’s campaign, but he has to realize, and I’m sure he does – look, he's been around this for a long time. He actually thought about being suggested he should be the vice president back in 1988, when George Bush selected me. So he's followed politics and he knows full well it's a different campaign once you're the nominee. And I fully expect fiery, yes, unconventional, yes, but it's going to be different. It has to be. It's a different type of campaign. He's running in the general election. He's running probably against Hillary Clinton, although there's the news story. We know who our nominee is going to be before the Democrats know who their nominee is going to be. So, no, different tone, has to be.

LAUER: Is he as qualified as she [Hillary Clinton] is?

GUTHRIE: Simple question, should he turn over his tax returns?

QUAYLE: He's not going to do that.

GUTHRIE: I know, but should he? Every presidential candidate going back decades has done so.

LAUER: His vice presidential candidate should be?

LAUER: You should come back more often.

LAUER: Thanks so much.