During an interview with Republican National Committee chairman Reince Priebus on Wednesday’s CBS This Morning, co-host Charlie Rose gleefully held up a copy of the Daily News and read the mock obituary on the cover of the left-wing tabloid: “...it says, ‘Republican Party 1854-2016; Dearly beloved, we're gathered here today to mourn the GOP. A once great political party killed by epidemic of Trump.’”

Just in case Priebus couldn’t see the nasty front-page illustration, fellow co-host Gayle King described it in detail: “No, and there's an elephant, Reince, in a coffin, just to make the picture really clear for you.” The hosts laughed as Priebus dismissed the publication: “Well, it’s only fitting of the Daily News.”

Before Rose touted the declaration of the Republican Party’s demise, Priebus pointed out the weakness of Hillary Clinton’s campaign following her defeat in Tuesday’s Indiana primary:

I think I said a couple months ago I thought that the Republican Party would end up with more clarity sooner than the Democrat Party and look at where they're at. I mean, once again, Bernie Sanders wins again in Indiana when actually Hillary Clinton was expected to win. You know, at some point, Hillary Clinton's going to have to start winning something somewhere.

The morning show hosts refused to discuss that subject with him.

CBS has routinely promoted Daily News hit pieces on conservatives and the GOP throughout the 2016 campaign:

Here is a full transcript of the May 4 interview with Priebus:

ROSE: So you have a presumptive nominee who was not a registered Republican until 2012, an outsider. Where does this leave your party?

PRIEBUS: Well, what I tweeted last night, Charlie, is that my belief is that he will be the presumptive nominee. You're not the presumptive nominee until you hit 1,237. That being the case, I'm just stating the obvious. And so, look, where it leads is that it's time to unite is what it leads to, Charlie. And look, I think I said a couple months ago I thought that the Republican Party would end up with more clarity sooner than the Democrat Party and look at where they're at. I mean, once again, Bernie Sanders wins again in Indiana when actually Hillary Clinton was expected to win. You know, at some point, Hillary Clinton's going to have to start winning something somewhere. 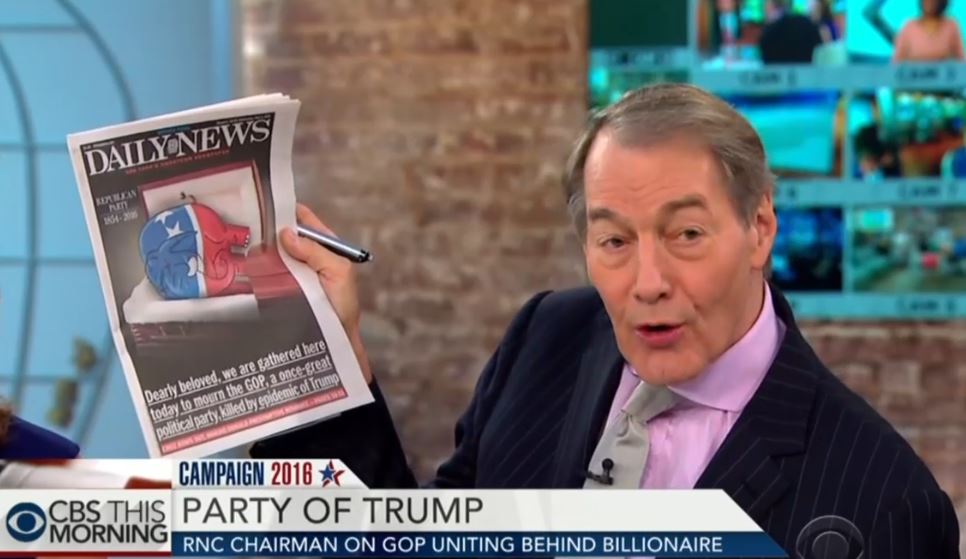 GAYLE KING: No, and there's an elephant, Reince, in a coffin, just to make the picture really clear for you.

ROSE: But let me add to the question – go ahead.

PRIEBUS: Well, it’s only fitting of the Daily News.

ROSE: Fair enough. Let me add to the question.

PRIEBUS: Only fitting of the Daily News.

ROSE: But people within your own party have said on this program that if Donald Trump is the nominee, it will destroy the Republican Party. Senator Graham is saying, for example, “How can a presumptive nominee who has so little support from Latinos and from women ever win a general election?”

PRIEBUS: Well, first of all, let me just remind everyone that what's happening in the Republican Party is pretty historic. When you look at voter registration against the Democrats has never been better than in 25 years. Our fundraising in the first quarter at the RNC was an all-time record. We've raised more money than we did in 2012. What I'm telling you is that the fundamentals are actually the opposite of the narrative. Now, clearly, when you have a race where you've got 17 candidates, and as of late, two very serious candidates with serious campaigns, it's not easy. It's hard. And I would be lying to you all if I said, “Okay, this is going to be easy. We're just going to pivot.” You know what?

PRIEBUS: We've got to unify, we need time to unify. And we will unify. But this is what today starts, which is this unification process.

O’DONNELL: Mr. Chairman, you mentioned the fundamentals, but there are some really interesting facts when it comes to the numbers. In fact, Trump is faring worse than Romney among white voters in all of the presidential battleground states. Polls even show Trump losing white voters in states where Romney won them: Colorado, Pennsylvania, Wisconsin. You can't win a general election in the Republican Party if you don't have those states, am I right?

PRIEBUS: Well, you can't win unless you are the party of the open door. And that means white voters, Hispanic voters, black voters, Asian voters, women. Look, I get it, and there's work to do and we're going to get to work. And so, it's not going to be overnight and instantaneous, but we're going to work at it. We've been working at it for four years. I think Donald Trump is ready to roll up his sleeves and get to work. I think Hillary Clinton still has a lot of work just to win her nomination. Now obviously she's in the driver's seat, but you know, you do have to win at some point if you want to be the nominee. And she needs to figure out how to win. She's nowhere near putting boots on the ground, she's got to get to work. But she's got to spend money to win her Democrat nomination.

KING: Okay, thank you very much. Speaking of winning or losing, should John Kasich stay in or out? Yes or no?

PRIEBUS: That's up to John Kasich.

PRIEBUS: It’s up to him, I’m not going to tell him to get out.

KING: No, we wanted to hear your opinion. That's okay. Alright, thank you very much, Reince Priebus, very good to see you.