On Tuesday, NBC’s Today promoted the new HBO movie Confirmation, about the 1991 Clarence Thomas Supreme Court hearings and the smear campaign waged against him based on false sexual harassment claims from Anita Hill.

Actor Greg Kinnear appeared at the top of morning show’s 9 a.m. ET hour to talk up the film and discuss his role playing then-Senate Judiciary Committee chairman Joe Biden. He insisted that Biden was nothing but fair throughout the hearings: “...if you watch just the hearings, you certainly get a sense of the – of his trying to walk the line. Of his trying to be impartial and to try to get this thing through.”

Kinnear lamented “how tough of a position” Biden was in at the time and being “dammed if you do, damned if you don't.”

Despite Kinnear’s assertions, a 20th anniversary look back at the hearings by National Review detailed Biden’s complicity in the vicious campaign to tear down Thomas:

The chairman of the Judiciary Committee, Sen. Joe Biden (D., Del.), assisted the feminists’ assault on Thomas. The Senate had confirmed the 43-year-old judge for other positions, so there was no need for a thorough investigation. Yet Biden delayed the hearings until late September.

“It was an intentional delay,” remembers former senator Hank Brown, (R., Colo.). “It was designed to accommodate the people who went after him”....

Feminist groups demanded that Democrats reopen the hearings, and Biden complied. What followed was a circus: days of testimony in which Hill enumerated Thomas’s supposed sexual transgressions and senators, awkwardly, asked Thomas to discuss them.

In August of 2008, after Barack Obama named Biden as his running mate, conservatives blasted the then-senator for his history of going after Republican judicial nominees. Talk radio host Mark Levin told CNSNews.com:

Basically, Joe Biden’s role on the Senate Judiciary Committee has been as a front man for the far left, despite all the talk about his centrism....Joe Biden has had his finger in every tawdry hearing in the Senate Judiciary Committee in my memory. He has lowered the standard of debate. He has politicized the confirmation process. He has used his position to defame a number of nominees, including Bob Bork and Clarence Thomas, and there’s no road too low that he won’t travel.

Early in the Today segment, the hosts gushed over Kinnear’s performance. Natalie Morales cheered: “You play a darn good Joe Biden. I wonder if the Vice President has seen this yet. You think?” Willie Geist predicted: “And you'll hear from him, too, if we know the Vice President.”

Kinnear replied: “I don't know. Can you guys put me in touch?” Geist quipped that Al Roker could get in touch with Biden, given the weatherman’s infatuation with the VP. Morales chimed in that Roker and Biden were “best friends.”

Here is a full transcript of the April 5 segment: 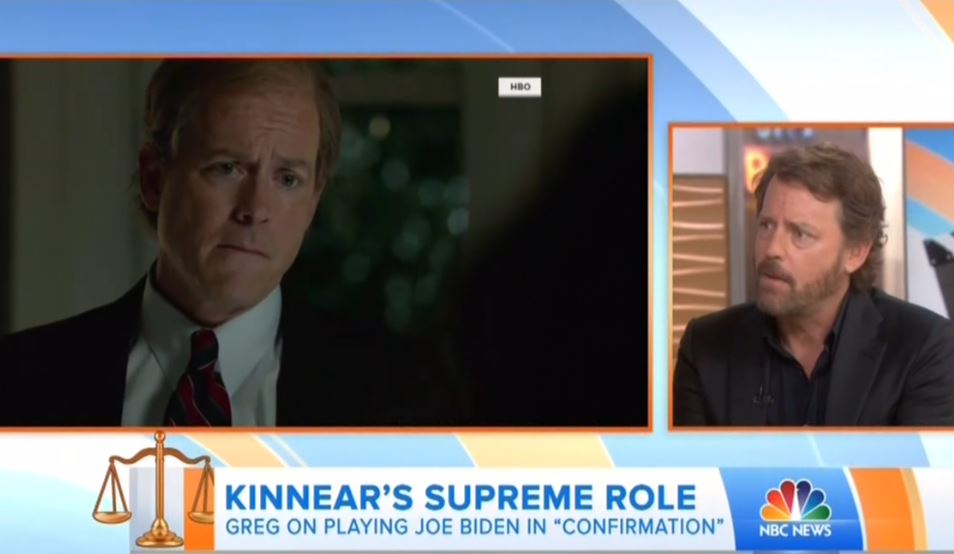 WILLIE GEIST: Fans of Greg Kinnear, like us, go way back, 25 years or so. Has it been that long? To his days as the host of Talk Soup. Of course he's since done pretty well for himself. Playing a rich kid playboy in Sabrina, Jack Nicholson's neighbor in As Good as it Gets, a part that earned him an Oscar nod by the way, and the unforgettable dad in Little Miss Sunshine.

NATALIE MORALES: Well, he's now taking on a powerful new role in the HBO biopic, Confirmation. It's about the scandal surrounding Justice Clarence Thomas and his nomination to the Supreme Court amid allegations of sexual harassment.

UNIDENTIFIED WOMAN [ACTRESS]: She didn’t call us, someone else sent her column in, and she has a corroborating witness. It took some convincing to get her to talk, but boy, once we started.

WOMAN: Possibly, plus he fired her.

WOMAN: She won't come. “Even though I have got the guts of a bull, I don't necessarily relish the fallout from speaking up in this kind of situation.”

KINNEAR: Well, I'm not going to be the chairman who knew about a second accuser and didn’t call her in. Subpoena her if that's what it takes, but get her down here.

MORALES: You play a darn good Joe Biden. I wonder if the Vice President has seen this yet. You think?

KINNEAR: I don't know. I don't know if he has or not. We had a little premiere out in Los Angeles last week and I had a chance to meet Barbara Boxer. And she said, “Oh, yeah, he'll see it.”

GEIST: Oh, yeah. And you'll hear from him, too, if we know the Vice President.

KINNEAR: I don't know. Can you guys put me in touch?

KINNEAR: I gotta go through you to get to [Biden]?

GEIST: What's the key to nailing Joe Biden? Because you really captured him there.

KINNEAR: You know, I had a wonderful hair and makeup group who – you know, he had at that time – his hair is actually pretty full now, but in 1991, if you look at the photographs, he was somewhat follicly challenged. And they had a group of people that would kind of put that thing on for about three hours a day. Which is an actor's worst nightmare, to have them reducing –

KINNEAR: But those, and I don't know, contacts, things. He has a certain sound though.

KINNEAR: And a certain – certainly, a certain presence. And you know, listen, you do the best that you can on something like this, but this is a guy who obviously has been a public servant for 45 years. And it’s so clear to the audience of who he is and kind of what he is, kind of his DNA is well-known to people. So I was a little nervous about that, taking on the role.

ROKER: Did you get a sense, going into this, you had one idea of who he was and what he stood for, and maybe had a different idea after you finished playing him?

KINNEAR: Well, I mean, listen, I was – I remember, of course, the hearings themselves. And I think a lot of people remember that time. It was a very contentious confirmation process and the theater of it just kept getting bigger and bigger and bigger. And up to that point, if you think about the media's effect on this, there hadn't been a 24 – there hadn't sort of been this live broadcast coming into people's house every single night, telling them these salacious details of this case. And listen, he sat on there and did – if you watch just the hearings, you certainly get a sense of the – of his trying to walk the line. Of his trying to be impartial and to try to get this thing through. But it was behind the scenes. Susanna Grand, who wrote the script, did an excellent job, I think, showing the machinations of all of the stuff that was going on. We don't – the movie doesn’t tell you – you don’t see Clarence Thomas and Anita Hill prior to the hearing itself. So it's very much he said/she said. But to see the machinations of what went on and how many things were happening kind of behind the scenes, and how tough of a position, I think, the Vice President – at that point a senator – was in. You know, dammed if you do, damned if you don't.

MORALES: Yeah, it was such a fascinating time in history. Greg is sticking around with us. Gonna play a little fishbowl with us, right?

MORALES: You’re going to have to answer some tough questions. Kind of like they had to answer on the confirmation hearings.

MORALES: But Confirmation premieres April 16th – not even close – but on HBO.