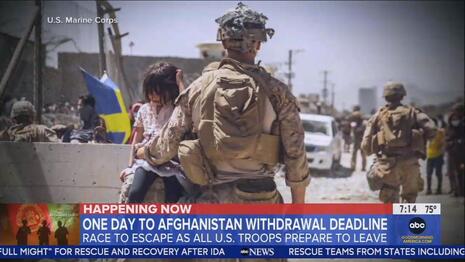 The U.S. botched exit out of Afghanistan just gets worse every day it seems. As the press finally steps up to do their jobs and hold the Biden administration accountable, many are still giving cover for the president, even after 13 of our servicemen and women were tragically killed by terrorists.

Today, the big three networks chose not to report on another heartbreaking story out of the New York Times, Sunday, about university students trapped in Afghanistan, abandoned by the U.S., as the August 31 deadline nears.

The Times reported Sunday that hundreds of students at the American University of Kabul were promised that they would be evacuated and waited all day at the airport Sunday, only to be turned away:

Hundreds of students, their relatives and staff of the American University of Afghanistan gathered at a safe house on Sunday and boarded buses in what was supposed to be a final attempt at evacuation on U.S. military flights, the students said.

Even worse, these students were also told that their names and information had been shared with the Taliban by the U.S. military, according to “protocol,” which is consistent with other reports about American names being handed over to the Taliban:

The email asked the 600 or so students and relatives to return home. The U.S. troop withdrawal from Afghanistan must be completed by a Tuesday deadline, so the U.S. military is turning from evacuating civilians to bringing its own personnel home.

The group was then alarmed after the U.S. military, following protocol, shared a list of names and passport information of hundreds of students and their families with the Taliban guarding the airport checkpoints, the university president said.

“They told us: we have given your names to the Taliban,” said Hosay, a 24-year-old sophomore studying business administration who was on the bus on Sunday. “We are all terrified, there is no evacuation, there is no getting out.”

This is at least the second report revealing how the U.S. was giving “kill lists” to the Taliban. This weekend, NBC and CNN journalists grilled Biden officials on this alarming news and one Biden official even admitted that names were given.

This morning the networks briefly touched on how many Americans and Afghans trying to evacuate would be left behind.

On Good Morning America, ABC's Ian Pannell reported how at least 250 Americans are still stranded in Afghanistan: “The urgency to evacuate greater than ever. Only 50 American citizens able to get out in a 24-hour period over the weekend. At least 250 who say they want to leave still remain," he stated.

On NBC’s Today show, Richard Engel reported, “The U.S. Is in the final stages of the evacuation. People are not able to get on to the air base anymore. Many Afghans are frightened and it looks as if they are going to have to wait for the civilian airport to open up. No indication when that might happen, however.”