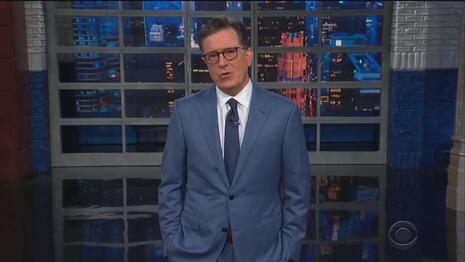 On The Late Show, host Stephen Colbert briefly mocked Biden’s failed prediction a few weeks ago that the Taliban wouldn’t take over in Afghanistan upon our exit. But then he spent he rest of his monologue attacking Republicans:

“Republicans were quick to point the finger. Including the former President who called on Biden to 'resign in disgrace' over Afghanistan. Pretty weird to blame Biden for withdrawing troops, when this summer, he was claiming credit for it,” Colbert snarked, before making a repulsive remark attacking Trump’s son.

Conflating leaving Afghanistan with how it was done, became a convenient tool for both Colbert and Meyers to scapegoat Trump.

Exasperated, the CBS Late Show host put all the blame on Trump’s actions:

The former president is right about one thing. His policies are equally responsible for the Taliban's takeover. After all, he reduced our troop presence from 15,000 to 2,500. The ceasefire he negotiated was directly with the Taliban. He didn't even include the Afghan government. Then, he went back and convinced the Afghan government to release 5,000 Taliban prisoners, many of whom are currently fighting in Kabul, while also agreeing to pull all troops out by May 1. So you can't put all the blame for a debacle you helped set the stage for.

Colbert left his nastiest remarks for the right, even comparing Americans to Taliban terrorists:

“Why should our soldiers be fighting radicals in a civil war in Afghanistan? We've got our own on Capitol Hill,” he remarked, showing a picture from the January 6 riot. Later he added, “And maybe Biden's right. Maybe there was no good alternative. Were we never supposed to leave? Make Afghanistan the 51st state? They'd have better COVID numbers than Florida.”

Colbert ended his monologue claiming that 70 percent of Americans agreed with President Biden’s withdrawal, because of a poll from last month. Which is highly misleading, as a more recent poll showed the same number of people disapproved of how it was handled.

NBC Late Night host Seth Meyers wouldn’t call out Biden either. Instead, he criticized the war in Afghanistan in general as  “a generational bipartisan failure that presidents and politicians of both parties bear responsibility for.” Speaking later to CNN’s Dana Bash, the liberal flack was defensive:

“​​We also have these bad faith arguments by those on the right who are forgetting that the plan that is being carried out right now, was Donald Trump's plan,” he claimed. Bash agreed:

He put it in place. He set the deadline. Well, let me back up he made the agreement inside Afghanistan for the pullout. He pulled most of the troops out, save for 2,500, and then set the deadline so the only question for Joe Biden when he took office, is whether or not he would stand by that, or change things….

As the Federalist’s Margot Cleveland explained, Biden had no obligation to do this. In fact, as soon as he got in office, he rapidly moved to undo many of Trump’s other policies related to abortion, the border, climate change, and the Iran nuclear deal. As much as the left wants to shift blame, this was entirely Biden’s bungling.

In contrast, ABC, NBC and CBS’s journalists skewered the president for his botched withdrawal, on last night’s broadcasts.