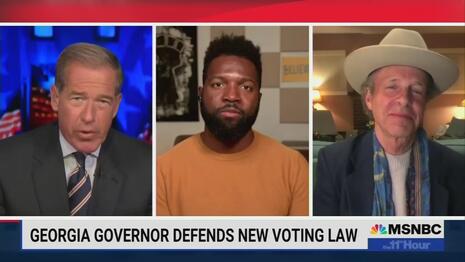 Hack journalist Brian Williams couldn’t help himself and had to contribute his own lies to the media’s smear campaign against Georgia’s election security law.

Williams first touted the left’s bullying of corporations based in Georgia: “Dozens of the nation's most prominent black business leaders are calling on companies to speak up against a wave of Republican backed restrictive voting bills.”

Before spewing hate towards Kemp:

“I have it on good authority that while that was audio only of Governor Kemp that he said it with a straight face. Why doesn't he go all in and embrace the rich heritage, the hard fought well-deserved tradition in Georgia for voter suppression? That would be new and remarkable,” he sneered.

Smearing Republicans with lies is routine on MSNBC. Williams guest, Mark McKinnon of Showtime’s The Circus and a former GOP advisor continued the tradition, bashing the Georgia election bill with debunked falsehoods:

None of this is true but the media keeps pushing it anyway.

Williams turned to his second guest, Baratunde Thurston, a MSNBC commentator and former producer for The Daily Show, to bash corporations not doing enough to satisfy “good-hearted” Democrat activist demands:

When you think of all these initials, DOJ, NAACP, ACLU, good-hearted people everywhere are watching voter suppression in realtime in front of our faces and being told it's something else. People are outraged by this and yet, what does it say? Let me take the other side, what does it say that it takes Coke and Delta to get angry and put out nasty statements about this to get the attention of some folks?

In turn, Thurston complained Georgia was a “fascist state” and any corporation should not do business with them if they truly support “Black Lives Matter:”

“In the best version of myself I hope it means that when companies say Black Lives Matter, they also start to act like it and I hope it means they recognize we have to be in this together and that to be a thriving corporation in a fascist state is no achievement at all,” he vented.

Thurston then demanded the media continue pushing how Republicans are “anti-democracy” and “un-American” and should instead promote Democrats’ radical federal election law like H.R.1 to “strengthen our democracy.”

Don't worry, the media's already doing that. TurboTax and Xfinity sponsored this lie-filled-segment, contact them at the Conservatives Fight Back page here.