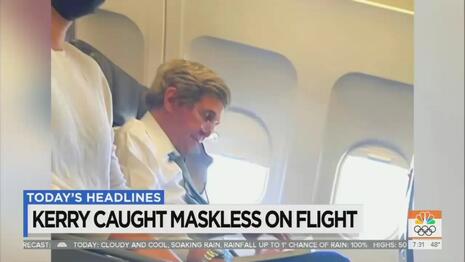 President Biden’s climate czar, John Kerry, was photographed flying commercial this week, while not wearing a mask. However, the mask-obsessed media didn’t seem to care, this time, which was the complete opposite of how they reacted to Republican Senator Ted Cruz photographed not wearing his mask on a flight last July.

Let’s start with what media outlets on television did address the Kerry controversy, which blew up on social media this week. Fox News covered it pretty extensively, but from the liberal media it’s been strangely quiet. Of the morning and evening network shows, only NBC’s Today show gave the incident a brief, but fair report on Thursday, which you can see in the video below.

According to a Snapstream search, ABC, CBS, CNN, MSNBC, and the late night shows have completely ignored the climate czar’s mask hypocrisy and the seeming double standard airlines hold for certain VIPs versus us regular folk.

Who else ignored Kerry? The New York Times...but they did publish an article last July, knocking Senator Ted Cruz (R-TX) not wearing a mask on a flight, while drinking coffee. Time magazine also obsessed over Cruz, but no such story on Kerry.

In fact, while Cruz appeared to be drinking coffee in his maskless moment which spread on social media last Summer, Kerry only appeared to be reading a book. Regardless, Cruz’s photo caught much more attention from the media.

Besides The New York Times and Time magazine, Cruz was targeted by late-night hosts Seth Meyers and Stephen Colbert.

On NBC’s Late Night, Meyers went on a nasty rant against Cruz on July 16, even using the incident to bash pro-life Republicans:

Especially since his colleague Ted Cruz apparently refused to wear one on a flight man, you'd think Ted Cruz would at least want to wear a mask so no one would see that his beard makes him look like an out-of-work hedgehog I'm sorry, but not wearing a mask is now officially the [bleep] thing you can do on a flight and I am including wearing open-toed sandals. You foot freaks are off the hook until this pandemic is over. This is the conservative movement of Donald Trump, a movement that rejects science empathy in favor of dumb culture war grievances like statues and "Cancel culture.” As a highly infectious deadly disease spreads like wildfire the supposedly pro-life party has abandoned you.

Over on CBS's The Late Show, host Colbert mocked Cruz with mean jokes on July 14:

But unfortunately for future Republican votes, people who don't wear masks seem always to be Republican. Take Texas senator and man whose beard shrunk in the dryer, Ted Cruz. A fellow passenger recently photographed Cruz on an American airlines flight not wearing a mask. You can't expect Cruz to hide the moneymaker, in that I would pay money to see less of his face. The airlines have a policy that passengers must wear face coverings during the flight but Cruz's staff explained that the senator had just "temporarily" removed his mask to drink coffee. Ah! But the same passenger also took this photo of Cruz at the gate also not wearing a mask. Come on, Ted, what's it gonna take to get you to be a fan of masks? Have the masks call your wife ugly and accuse your dad of killing J.F.K.?

Two days later on MSNBC’s Morning Joe, co-host Mika Brzezinski made a nasty remark blaming Cruz for a surge in nursing home deaths in Texas. She complained, “Thank you Ted Cruz for fly with no mask, you know, why wear one?”

But you won't see any of this melodrama from Mika or the others about Kerry because he's a Democrat and as we've found out, the rules don't apply to them.