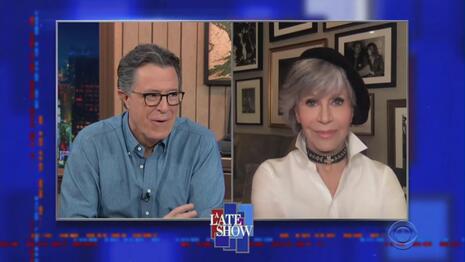 Radical left-wing activist and actress Jane Fonda was welcomed to Stephen Colbert’s The Late Show Thursday evening to be worshipped yet again by her Hollywood friends ---who recently gave her a lifetime achievement award. Fawning fanboy Colbert celebrated the 83-year-old’s work for “social justice” as well as the restoration of a controversial documentary celebrating her foul anti-U.S.O. tour from the early 1970s.

After congratulating her Golden Globes speech, Colbert credited Fonda's work "changing the world" being a catalyst for the Black Lives Matter and climate change movements:

STEPHEN COLBERT: One of the things I admire about you, is that you don’t just talk the talk, you walk the walk. You have been working for social justice your entire career. What does this moment in time right now mean to you as someone who has worked so hard to change the world? Because so many things are changing right now

JANE FONDA: I’m extremely hopeful. The last four years have been painful for a lot of people and very, very disturbing. But a lot of people also for the first time realized the extent of which white supremacy is still alive in this country, the extent of which police violence is harming black people, and there’s you know, tens of millions of Americans now who are aware of the urgency of the climate crisis and all of these things are connected and people understand that. so I feel like we’re at a pivotal point in history when people are really ready to make our elected officials do what needs to be done and address all these intersectional crises and I think we can do it.

You were in an anti-war road show that was captured in a 1972 documentary called, F.T.A., and its being re-released tomorrow. If it was captured in 1972, first of all what is it, and why is it being released now?

The TV host completely ignored how controversial Fonda’s anti-Vietnam stunts were and how she was viewed as a traitor by many in the country. Of course Fonda glamorized the anti-American tour and proudly touted how it was called, “F**k the Army":

We’ve been fed this myth that there were the anti-war movement and then there were the G.I.’s. And they hated each other. Which was totally not true. You know, just looking at the seas of faces of soldiers laughing and applauding and really you know enjoying the fact that we were there, it was thrilling.

After Fonda suggested President Nixon pulled the film from movie theaters a week after it was released in 1972, Colbert played a clip from the re-released documentary which showed Fonda pretending to be Pat Nixon, warning her husband about protesters storming the White House. Colbert loved the clip, chuckling afterwards, before fawning over the advice she was given to “laugh and be joyful” during protesting.

But National Review writer Kyle Smith revealed the tour was "worse than you think" and might as well have been called “Socialist Sesame Street” or “Free to Be Ho and Me." Fonda and her Hollywood friends were clearly trying to help the Communists by encouraging U.S. soldiers to shoot their officers, and commit insubordination among other things (click “expand”):

Fonda, [Donald] Sutherland, and assorted tuneless musical acts (songs include “My Ass is Mine” and “Nothing Could Be Finer Than to Be in Indochina”) first went on the road in the U.S., performing in countercultural coffee houses. Next they went on a Pacific tour, aiming to attract off-duty anti-war troops they could influence and leverage while putting on shows near military bases in Hawaii, Tokyo, Manila, and Okinawa. In a new intro to the film, Fonda frames herself as simply an ally to the anti-war troops. It’s evident however, that she and her pals were determined to do everything they could, including encouraging crimes, to depress morale and help boost the Communist side.

...Sutherland and guests are seen onstage in their F.T.A. show making larkish jokes about “fragging” — suggesting that it’s hilarious when enlisted soldiers shoot their officers. Other dopey songs and skits absurdly refer to U.S. efforts in Southeast Asia as “genocide,” urge soldiers to commit insubordination, and steer them to refuse to fight. One describes the war as secretly being controlled by “the businessmen you’re fighting for,” in an interlude that features Fonda and Co. singing and dancing in top hats while carrying canes. Singers belt out lines such as, “They’ll lock you up in their stockades, yeah they’ll lock you up ‘cause they’re afraid.” The vibe is half puerile Seventies variety-show, half Maoism; the tour could have been called Free to Be . . . Ho and Me. Or maybe Socialist Sesame Street.

Neutrogena, Panera and Samsung sponsor The Late Show, contact them at the Conservatives Fight Back page here.