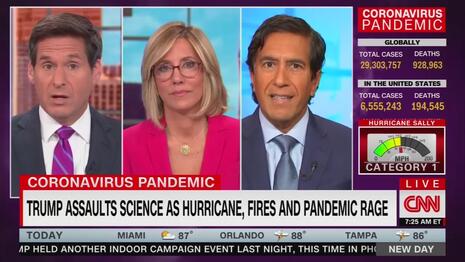 Some days, CNN’s Chicken Little routine about President Trump is so extreme it seems like parody. Tuesday, the network was not about to give the president any credit for visiting California and speaking to local leaders about the wildfires. Instead, they accused Trump of "assaulting science" by calling for better forest management instead of just blaming climate change.

The network played a clip of Trump disagreeing with California National Resources Secretary Wade Crowfoot after Crowfoot blamed climate change. When Trump expresses hope that the weather will cool, Crowfoot says “I wish science agreed with you,” to which Trump replies jokingly, “I don’t think science knows, actually.”

With condescension, Berman lectured, “Science does know. It is 2 1/2 degrees warmer on the West Coast than it was in the 1970s. Science knows.” Wait a minute, so “science” has a mind now?

The CNN journalist let Merkley hammer Trump to do more. Berman wouldn't put any blame on local Democrat leaders. Before going to commercial, he took up Joe Biden’s violent rhetoric about Trump being a climate arsonist: “We hear President Trump questioning the science of climate change when there is no question. There is also an assault on science from inside the administration on the coronavirus pandemic.”

After the break, Berman and co-host Alisyn Camerota teamed up with CNN medical expert Sanjay Gupta to give Biden more ammunition he could use against Trump. Not even legitimate claims backed by science, such as Trump warning about trees being flammable and at risk of causing explosive fires, were safe from the CNN hosts’ snide mockery.

Playing a clip of Trump speaking about this, Camerota sneered, “Exploding trees. The president often makes claims unsupported by science.” Except Trump was right, and she wasn’t the only journalist making this mistake.

CNN would rather mock Trump and push Democrats’ radical and expensive environmental policy than actually report how progressives' environmental policies have made these problems much worse and there are practical actions that California leaders should be taking to manage the fires and forests. As the discussion moved on to panicking over coronavirus, Camerota suggested the president was maliciously harming his voters:

It's not only crazy making, as you have pointed out, it's cruel. It's cruel. Latinos are 4.6 times more likely to be hospitalized with coronavirus than other demographics. And that was a Latinos for Trump event last night. And the president packed them in, shoulder to shoulder, because he didn't care. I mean, that's the only thing we can conclude. He cares enough for himself to be separated from everybody, but everybody else can sit chair by chair, packed in together.

Yes, Trump is trying to kill off his voters, that makes sense. And CNN pretends like Fox News is the one in conspiracy-land?

Climate change is the left’s bogeyman and the media willingly lets Democrat leaders escape all responsibility for their actions or inaction by blaming every bad thing on climate change.

Contact CNN’s advertisers CarShield at the Conservatives Fight Back page.