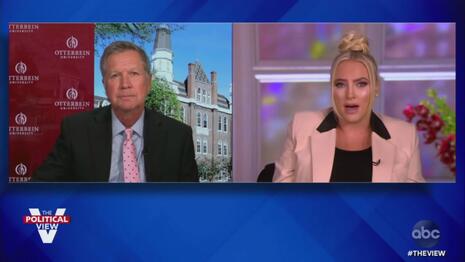 Friday on The View, Republican turncoat John Kasich told co-host Meghan McCain not to be worried that Joe Biden and Kamala Harris would be a radically pro-abortion administration. Kasich, who endorsed Biden at the Democratic National Convention last month, assured the fellow pro-life Never Trumper that Biden’s “character” wouldn’t allow him to actually follow through on the leftist promises his campaign is running on.

This doozy of a defense came when McCain asked the former Ohio governor how pro-life conservatives who “hate Trump” like her, can vote for the Democrat ticket, when they have promised tax-payer funded abortion and abortion up till birth:

Governor, I actually have been looking forward to having you on to ask this question because you know my family. I was raised with a certain set of values and principles and I was raised conservative. I've only gotten more conservative as I've gotten older, and I'm almost nine months pregnant and I feel like the stakes are incredibly high. I hate President Trump, and I think everybody else knows that, but there are some policies on the left specifically with Senator Kamala Harris right now having to do with abortion. She co-sponsored a bill opposing any limits at all when you can get an abortion and it's a big break from Joe Biden's past positions. And the Biden-Harris campaign is also running on taxpayer funding for abortions. I was surprised at this, including those after 20 weeks. You're pro-life, and I know that. You were pro-life in politics as am I. It's a big big part of who I am and my platform, and I don't think taxpayers should be funding abortions for women who are as pregnant as I am right now. So how would you push back against a voter like me who's concerned about things like this in a possible Biden/Kamala administration?

The supposed Republican Kasich took the same approach as left-wing journalists defending Biden as a “moderate.” He assured McCain that Biden would make compromises with conservatives, despite his flip-flop on the Hyde Amendment in 2019, his promise to keep abortion late in pregnancy legal and, along with Harris, sponsoring bills to protect late-term abortion. Not to mention choosing the most liberal, and pro-infanticide Senator in Congress as his running mate.

Kasich even justified his hypocrisy on being pro-life and supporting far-left Democrats by saying that having someone like Biden who “can pull us together” was way more important.

"I agree with you on your position on the life issue, Meghan, but look. Again, I'm not a person -- I disagree with Joe Biden in a number of areas. I don't like some of what he's talking about in terms of capital gains taxes, but the issues here are dwarfed in my opinion by the fact that he's a person that can pull us together," he said.

Kasich then suggested that Biden wouldn't actually follow through on his radical promises, anyway: "So do I think that if we wins, that all of a sudden all these things are going to happen that are negative? No, I don't believe that at all because that's not his character,” he argued, adding that Biden would find "common ground" and we wouldn’t “end up in some cataclysmic place if he wins,” but with Trump re-elected we would:

“[B]ut I do believe four more years of this division is wrecking the very soul of our country, and we continue down this path, I don't know how we come back,” he pleaded.

The media has and will continue to hide how far-left the Biden-Harris ticket really is, particularly on the issue of abortion.

You can contact The View's advertisers like CarShield and L'Oreal at the Conservatives Fight Back page here.