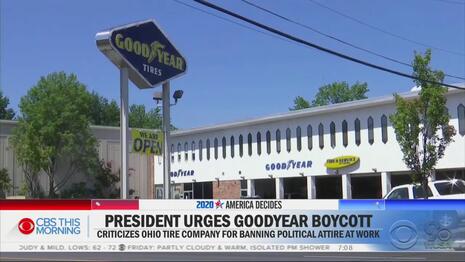 Between the big three networks, CBS was the only one to report on the viral Goodyear Tires story that was trending on Twitter yesterday. But instead of sharing the company’s discriminatory memo that targeted conservatives, CBS’s Paula Reid deliberately mislead viewers by spinning the company had banned political messages from "both sides."

Conservatives were understandably upset Wednesday after seeing a leaked employee training slide from Goodyear Tires which said the following:

After facing massive backlash, President Trump called for a boycott of the company. Goodyear issued a “clarification” trying to absolve their corporate headquarters from responsibility, but they didn’t apologize for it. While the other networks ignored this discriminatory message, CBS did talk about it but only to make it about President Trump and omit everything the slide said.

Doing Democrats work for them, anchor Tony Dokoupil attacked the President for calling for a boycott during “an economic crisis.” Did he forget liberals were calling for a Goya boycott just a month ago?

The president is stirring up new controversy after calling for a boycott of Goodyear tires, a boycott he's calling for because of the company's policy on political speech in the workplace. Democrats are saying that the move could cost jobs at a time when the country is already in an economic crisis.

Reporter Paula Reid's report was worse. Nowhere did CBS actually show the slide or read what it said in full. Reid actually lied saying that political messages "from both sides" were banned by the company. Black Lives Matter IS political, not to mention "LBGT pride." Instead she complained Trump was objecting to a company's dress code policy:

REID: Mr. Trump's comments come after Goodyear employees were told political messages from both sides were being banned, including MAGA attire. CBS news pressed the White House on why the president was attacking an American company.

REID TO MCENANY: Why is the president retaliating against a private American company for their dress code and potentially jeopardizing jobs?

KAYLEIGH MCENANY: Goodyear needs to come out and clarify their policy.

REID: Racial equality, racial justice, that is OK, but not political speech!

MCENANY: As far as I'm concerned blue lives matter is an equity issue there.

What Reid failed to mention was that Goodyear's clarification spelled out which political causes were allowed to be voiced. "[W]e ask that associates refrain from workplace expressions in support of political campaigning for any candidate or political party, as well as similar forms of advocacy that fall outside the scope of racial justice and equity issues," they wrote.

CBS's blatant lying was paid for by its sponsors, Choice Hotels and Honda. You can tell them how you feel about this deceptive reporting by following the links above.