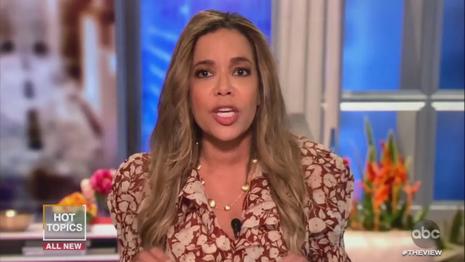 For the second day in a row, The View has gone after Fox News primetime host Tucker Carlson, aiding the left-wing effort to get him taken off the air. Only host Meghan McCain blasted the “cancel culture,” anti-free speech power trip the left is currently engaging in. But her co-hosts vehemently disagreed with her, proudly calling their intolerance for conservatives actually “accountability,” not “canceling.”

After Tucker Carlson addressed his head writer, Blake Neff, resigning after posting offensive comments under a pseudonym online, Carlson announced he would be taking a “long-planned” vacation the rest of the week. The liberal View hosts pounced on that announcement, saying his response about the show’s former writer wasn’t enough, before floating conspiracies that this “vacation” was Carlson escaping scrutiny:

JOY BEHAR: By the way, the writer has said -- anything he's reading off the teleprompter, the first draft was written by me and notes that he and Carlson see eye to eye on most issues. There you have it. No wonder he's taking an extended vacation. He knows he's as guilty as the writer.

SUNNY HOSTIN: Tucker Carlson has a long history of making racially insensitive comments, of making culturally insensitive comments. He’s one person that said white supremacy was a hoax. He also said that Black Lives Matter wasn't about black lives at all….For Tucker Carlson to try to blame shift here I think is really really despicable. I wonder about this long-planned vacation. He seems to take a lot of long-planned vacations when it gets kind’ve hot in the kitchen for Tucker Carlson.

Sounds like Hostin doesn’t realize what BLM really believes. But Meghan McCain blasted “cancel culture” saying she supports Carlson because she believes in “diversity of opinion” in the public square.

But Whoopi repeatedly suggested, without evidence, that Carlson was a racist so he should be punished:

WHOOPI: Debating is great. What you want to stay away from is you want to get away from the racist aspect of it. The racist aspect of it is thrown out there to keep you from making your points...The writer is known for his racist writings. I don't want to hear that when I want to go listen to Tucker Carlson talk about what's wrong with the left. I don't want to hear about it being challenging to me as a person of color because you don't like my color. Tell me what you don't like about my politics. Leave my color out of it. That's what I want, and that’s what I want Tucker Carlson to do. When he doesn't -- there's plenty to show that he is one that has spoken the words almost directly as this boy has written them, I have a little problem with that.

McCain asked her co-hosts if he should be canceled. Sunny Hostin wagged her finger at McCain and scolded, “It's not about cancellation. It's about accountability!”

Funny how it’s just conservatives who are held “accountable” while nothing happens to left-wing hosts like Joy Reid for similar situations. McCain actually brought that up, and Whoopi promptly cut her off to go to commercial break. When she returned, Whoopi snapped at McCain and admitted she was right about Reid, cutting off any further conversation about the MSNBC host.

Behar agreed with Whoopi that she had nothing against free speech, but this was about racism. She made the distinction between changing the Washington Redskins NFL team name (good) and the New York Times forcing out its editor for printing an op-ed from a Republican Senator (bad).

McCain railed against the media and culture forcing out opinions it doesn’t like (such as Bari Weiss), to close out the segment:

I want to read opinion columns in the New York Times from a diversity of people. I worry we're going down a slippery slope where we won't have the diversity of opinion that all of us celebrate. When I see Bari Weiss who doesn't feel comfortable at the New York Times it's another dangerous moment in mainstream media where it’s one more person with an interesting opinion that we will not have. I don't think that's good for America. I certainly don't think it's good for American media.

The View was brought to you by Colgate and Mr. Clean.