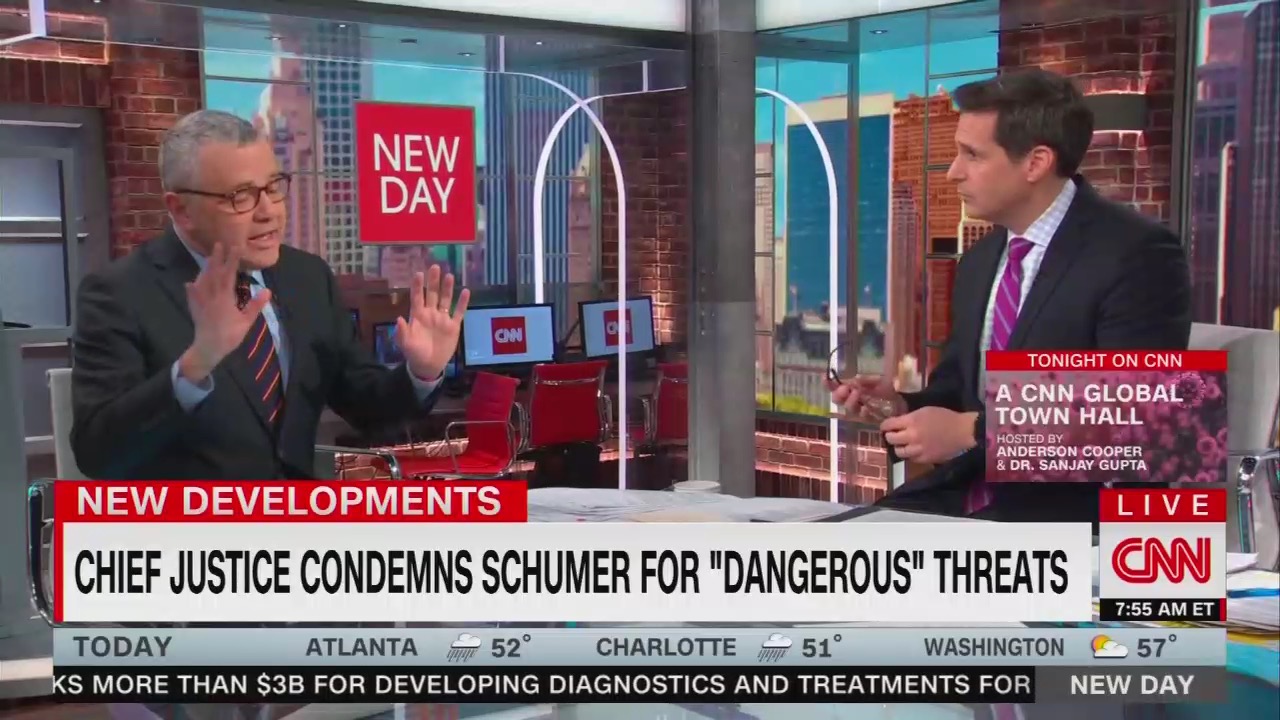 Toobin started off reluctant to criticize the Democrat:

"Well if you parse what Chuck Schumer said, it was wrong, it was inappropriate. It was not the way you should talk about the Supreme Court. Frankly, no one noticed what he said until Roberts intervened. But it was political hyperbole of a sort that politicians shouldn't engage in," Toobin said.

He then tried to defend Schumer while attacking Trump:

"What's really unusual here is Roberts getting involved. When Chuck Schumer’s not exactly the American political figure we think of who usually engages in invective, in nasty politics. That's, of course, the president, and Roberts has been almost -- not totally -- Almost entirely silent about the president," Toobin gushed.

But John Berman rightfully corrected his colleague, pointing out that Roberts has also condemned Trump publicly, before, a point Toobin reluctantly conceded.

Remarkably, both CNN journalists went on to dismantle the left’s talking point that Trump’s comments asking liberal justices Sonia Sotomayor and Ruth Bader Ginsburg to recuse themselves from Trump court cases was the same as Schumer threatening violence against Kavanaugh and Gorsuch:

TOOBIN: The president did not say about Roberts -- about Ginsburg and Sotomayor that they are going to reap the whirlwind, that they are, you know, in physical danger. He said they should recuse themselves. It was a ridiculous argument, but it’s a political argument. It wasn't a personal attack.

BERMAN: And you don't really have to parse what Chuck Schumer said. You just have to listen to it.

BERMAN: He said you will pay the price. You won't know what hit you. He said this specifically to Justice Gorsuch and Justice Kavanaugh.

Toobin again conceded that Schumer’s threat was “wrong and inappropriate” while trying to also downplay them as unusual for the Democrat:

Still, Toobin tried to find the silver lining for Democrats, saying that Chief Justice Robert’s rebuke was a good reminder of the importance of having liberal justices on the Supreme Court to preserve Roe v. Wade:

And I think the president's -- Schumer's defenders and the people who are critical of Gorsuch and Kavanaugh are coming out in defense of Schumer and saying, look, it’s a significant issue and everyone has a right to speak out on it….[W]here is the Supreme Court in this campaign? Why are they never talking about the future of the court? Maybe in a perverse way, this dust-up, and I think it's really sort of a momentary dust-up, will remind Democratic primary voters, this issue is important. And Neil Gorsuch and Kavanaugh may be a much more important legacy of Donald Trump than anything they actually talk about on the campaign trail...And if it leads to political discussion of the future of the Supreme Court I think that's a good thing. Name-calling like Chuck Schumer got involved in, not a good thing.

“We’re in agreement not to threaten people,” Berman noted to end the segment.