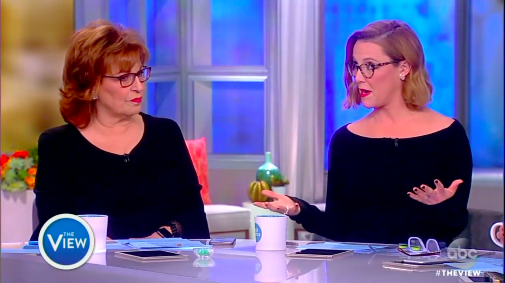 CNN analyst and HLN host S.E. Cupp guest-hosted The View today, and used the occasion to push back against the table’s liberal spin.

The discussion started on the Friday show about how Daniels was profiting from her story, despite signing a non-disclosure agreement, being offered interviews on entertainment and late-night television shows. Cupp directed the conversation to Monica Lewinsky, and asked why ABC’s Jimmy Kimmel wouldn’t bring her on his show too.

“What bothers me though in giving her this platform, Monica Lewinsky was also caught having an affair with a president. Who is going to interview her? I would love to see someone interview her. Her life was ruined by this affair,” Cupp argued.

Cupp shot back, “That's why Monica should be given more of a platform!”

But fellow host Sunny Hostin didn’t want the conversation to be about Bill Clinton.“But Bill Clinton isn’t the president anymore! The president is Donald Trump. So it's much more relevant at the very least!” an exasperated Hostin gushed, as the audience applauded.

Cupp disagreed, and used that point to call out the left’s hypocrisy when it came to believing Bill Clinton’s accusers.

“No, no no,” Cupp shook her head. “This is all going to come back to roost. Until the left really deals with the fact that feminists like Gloria Steinem and Hillary Clinton herself went after these women and attacked them and smeared them. Until that is all reckoned with you can't say he's not president anymore,” she argued.

“Of course you can!” Hostin shot back.

Co-host Meghan McCain agreed with Cupp that the left had no moral ground here, after how they treated Bill Clinton’s “mistresses.” Unfortunately, neither Cupp or McCain made the distinction between the two cases, one being an alleged affair, and another being multiple rape accusations.

“There's a lot of hypocrisy with a lot of sort of like as S.E. is saying, leftists, feminists. It publicly came out that Lena Dunham was caught in an off the record HBO dinner talking about how she was having a hard time supporting Hillary Clinton because of her relationship with Bill Clinton's mistresses,” McCain noted.

But Behar argued that the president’s infidelities was inconsequential because supposedly “every” president had mistresses:

“If you go back in history and bring back every woman who schtook [bleeped]-- the president the whole building would be filled. I mean starting with Thomas Jefferson and his slave girl Sally Hemings. And George Washington did it, too, I heard,” Behar claimed.

The topic never got brought back to the Clintons, and perhaps for good reason. Whenever former host Jedediah Bila would bring up the hypocrisy of the media turning a blind eye towards Bill and Hillary’s misdeeds, Bila’s fellow hosts would erupt in rage and attack her for bringing up this simple fact. The pro-Clinton bias was so strong on The View, that it was even rumored to be the reason why Bila was fired from the show.