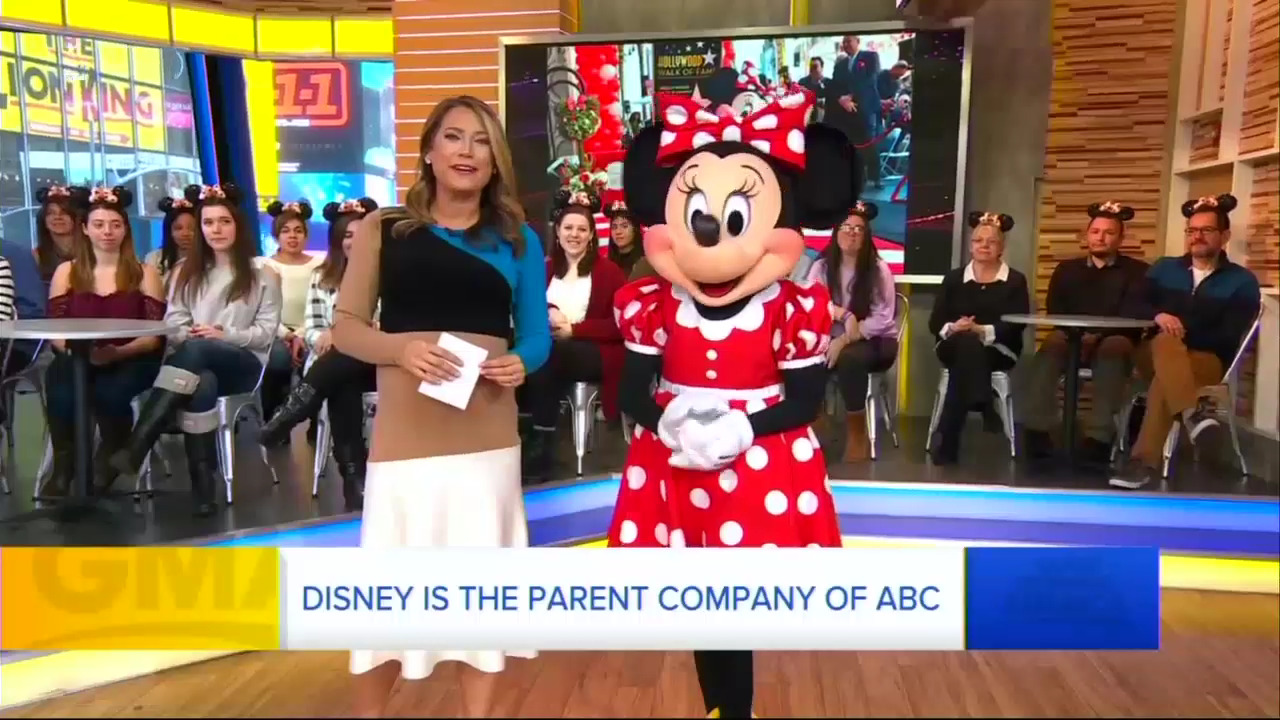 The liberal media are so reluctant to give President Trump credit for anything positive his legislation achieves, that they will even keep silent when that legislation directly benefits them.

CNBC and Bloomberg reported Tuesday afternoon that Disney was handing out one thousand dollar cash bonuses to 125,000 of its employees because of the 2018 tax cuts passed by Trump. Not only that, but Disney’s CEO Bob Iger announced they would be investing fifty million dollars into a higher education program for new employees. Iger cited the tax reform as the reason for these employee rewards. Despite this, ABC didn’t mention the good news from their parent company that day on their World News Tonight program, nor did they the next morning on Good Morning America, January 24.

To make the absence of even a news brief on this topic even more silly, GMA did find time to praise Disney for something else. Meteorologist Ginger Zee brought on a Minnie Mouse character actor to celebrate the 90th anniversary of the beloved character, in a brief segment. ABC played a brief clip of the famous mouse getting her star on the Hollywood Walk of Fame for the occasion, as Zee pointed out that Disney had provided mouse ears to the in-studio audience.

But still, no news about the company’s bonuses or tax cuts, made its way into the segment.

It’s not just Disney making their employees lives better, either. Several other companies have announced recently that they would be passing on their savings on taxes to their employees, from Starbucks to Apple to Walmart to Southwest. Service providers, such as electric companies, also vowed that their customers would be getting lower bills this year, giving credit to the tax legislation.

Yet the network news, ABC, NBC and CBS, have barely touched on these positive stories that impact countless Americans. Between January 1 and January 12, MRC Business found only two reports mentioning these bonuses between the three networks, and even those stories didn’t correlate the good news to the tax cuts. From that report:

At least 65 companies of all shapes and sizes including big names like Walmart, JetBlue and Southwest Airlines announced bonuses, greater 401(k) contributions and/or increased base wages (often to $15) in that two week timeframe. Those announcements followed at least 63 other companies’ decisions to raise wages or give out bonuses between Dec. 20, and Dec. 29, according to Americans for Tax Reform. Tax cuts passed Dec. 20. Companies specifically cited the lowered corporate tax rate as the reason for their decision.

While ABC ignored the development, CBS did give a brief to the latest story on CBS This Morning, January 24, and even gave Trump’s tax bill credit, without mentioning him by name:

GAYLE KING: Starbucks announced this morning it will give U.S. employees a pay raise because of the new tax bill. Workers will also get stock grants. Both Verizon and Disney made similar announcements yesterday. Verizon will give around 155,000 employees 50 shares of restricted stock each. Each person will get that. And Disney will give more than 125,000 workers a $1,000 bonus.

NORAH O’DONNELL: So much for those people that called that a fantasy, that companies would give back.