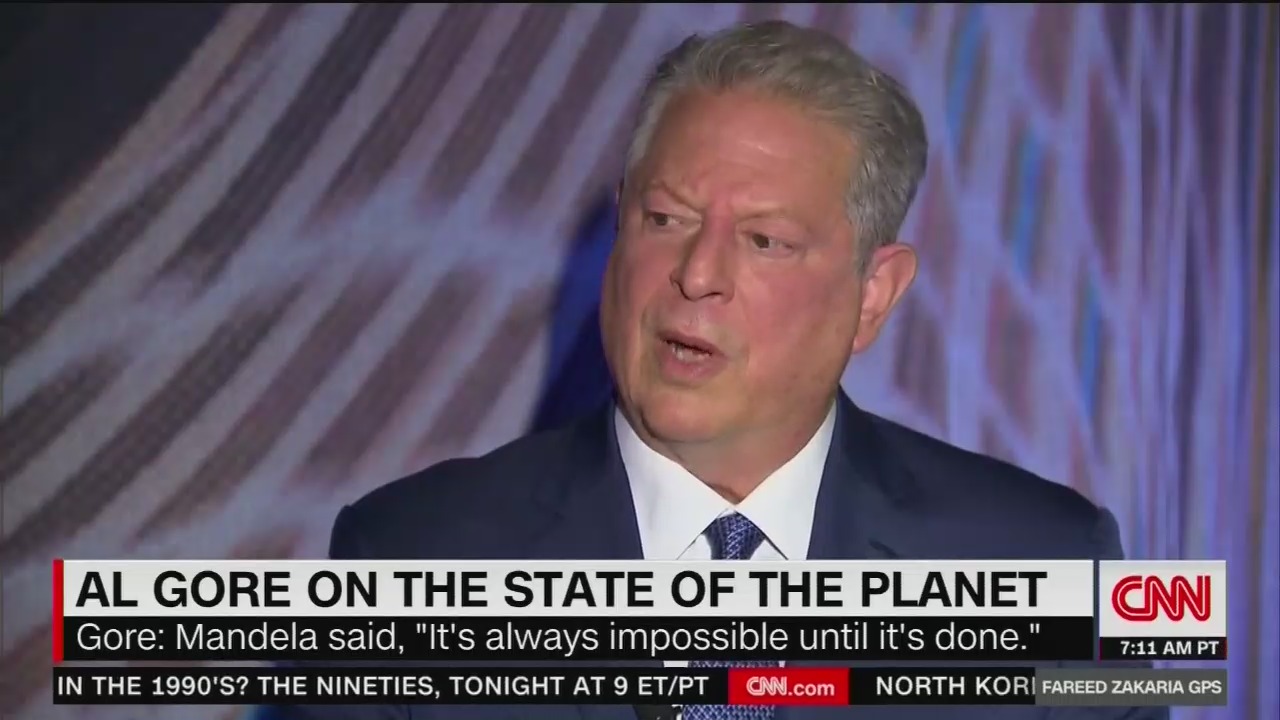 Former Vice President-turned-climate change activist Al Gore was given another opportunity by CNN this weekend to shame skeptics of his climate change propaganda as backwards bigots. Just last week when the network hosted a town hall with Gore, he compared the fight against climate change to a matter of “right and wrong,” much like the Civil Rights Movement.

Sunday, Gore sat down with CNN’s Fareed Zakaria to blast critics again, as behind the times and on the wrong side of history.

The interview began with Zakaria talking to Gore about his documentary, An Inconvenient Sequel, and his experiences traveling the world documenting man-made climate change. The CNN host then asked if Gore had any “optimism” for the future, given what he’s “seeing now.” Gore praised the international support for his climate change agenda, saying the U.S. was at a “tipping point” for broadly accepting climate change dogma.

But then Gore made climate change a moral issue again, saying that those not on board with this belief were like those resistant to the civil rights movement in the ‘60s.

FAREED ZAKARIA: Do you think when you look at the future, you are able to maintain your optimism given the kind of pretty bleak picture of what you're describing seeing right now...

GORE: [A] decade ago, when my movie first came out, the solar deployment had a long flat line that was just beginning to slope upward. Now it has shot way up. The same thing has happened with cell phones, the same thing has happened with other technologies. That pattern also describes some political and social revolutions. I grew up in the South when the civil rights movement was gaining momentum, believe me, the resistance to civil rights was at least as ferocious as the resistance to the climate movement and solving the climate crisis. In the anti-apartheid movement, Nelson Mandela once said, it's always impossible until it's done. And we are right at that tipping point, where the climate movement is concerned. And the agreement 18 months ago in Paris was a truly historic breakthrough. Virtually every country in the world agreed to go to net zero global warming pollution by mid century, or as soon thereafter as possible. Since the Paris agreement, we have seen that powerful signal send to investor, to industry, to business. India again just announced two months ago. That in only 13 years, 100% of their new cars and trucks are going have to be electric vehicles. That's faster than what the United States is doing. And we're seeing dramatic changes like that, driven by economics and driven by the awareness dawning on millions more people every day. That this is for real. And we have an obligation to our kids and to ourselves because it's beginning to affect us. This city, here in New York City, in the first movie, the single most controversial scene perhaps was the prediction from the scientists that the World Trade 9/11 Memorial Center would be flooded by the ocean water, with the combination of sea level rise and storm surge. They said that was ridiculous, but when Superstorm Sandy came from the Atlantic, it crossed ocean waters that were 9 degrees fahrenheit warmer than normal. And it became very powerful, very broad, filled with moisture, and the World Trade Center site flooded many years ahead of predictions.

Just like last week, Gore was not challenged by CNN for making such an absurd comparison.

Later in the interview, Zakaria asked,“What do you make of the chaos in the White House? Have you ever seen anything like this?”

Apparently working in a White House rocked by numerous scandals and impeachment was nothing compared to Trump. Gore answered:

Never. Never. And from my point of view, the worst of it is that it's producing constant distractions from the big tasks that we have before us. And of course the biggest of all is solving the climate crisis. Look, this is for real. This is for real. Were we not to take a hold of it and solve it, the consequences would be too catastrophic to even imagine.