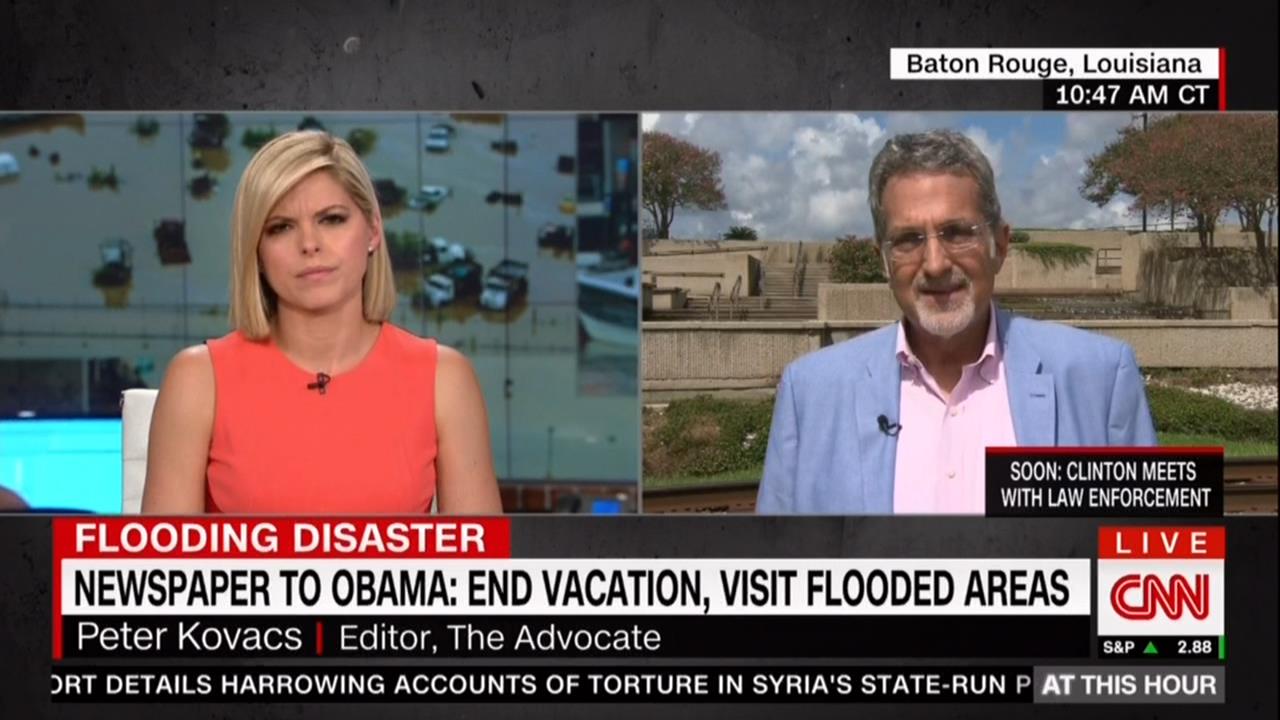 Thursday morning, CNN’s Kate Bolduan brought on a local Louisiana journalist to discuss his paper’s editorial calling for President Obama to stop his vacation and address the devastating flood which has killed 13 people and been called “the worst disaster since Hurricane Sandy” by the Red Cross. The journalist, Peter Kovacs, editor for The Advocate, Louisiana's largest daily newspaper, compared Obama’s behavior to Bush’s after Katrina and said Obama needed to remember that being President was a “24/7 job,” vacation or not.

After a live segment from Livingston Parish, LA, host Kate Bolduan introduced Advocate editor Peter Kovacs and asked him “why” did his paper want to put this message out to the president. Kovacs responded by telling a story about how former President Lyndon Johnson reacted to a devastating hurricane during his presidency, and how he wished Obama could live up to that model, saying, “I guess they don’t make presidents like that anymore.”

KOVACS: You know in 1965, Lyndon Johnson was president during Hurricane Betsy. And he received a call from Russell Long who urged him to come to Louisiana and President Johnson said, “Don't worry, I'll send my best man.” Russell Long famously said, “We don't want your best man, we want you”. And president Johnson was in Louisiana the day after Hurricane Betsy and he went into a shelter that was darkened and had no electricity and it was night and he shined a flashlight in his face and he said, “I'm Lyndon Baines Johnson, and I’m your President, and I’m here to make sure you get all the help you need.” And I don't know, I guess they don't make presidents like that anymore.

Bolduan then brought up how Kovacs had warned Obama in the editorial to not repeat mistakes of his predecessor, in how Bush reacted to Hurricane Katrina. She asked, “No one forgets that. Do you think President Obama deserves that same criticism here?”

Kovacs was hesitant to slam Obama but said that “history will judge” whether or not “he deserves that same criticism,” adding that Obama “can still come here.” Bolduan then asked if he “would feel differently” if President Obama was in the White House instead of vacationing. Kovacs wouldn’t take the bait and responded,

Bolduan asked if Kovacs had heard anything from the Obama Administration after his paper’s article came out last night, to which he admitted, “No, we’ve not.”

Only time will tell if the media call Obama's absence a “stain” on President Obama’s legacy he could “never recover from,” as they did to President Bush with Hurricane Katrina.