Lamont Hill: Just Because Poor Cities Are Run by Democrats, Doesn't Mean Democrats Are to Blame 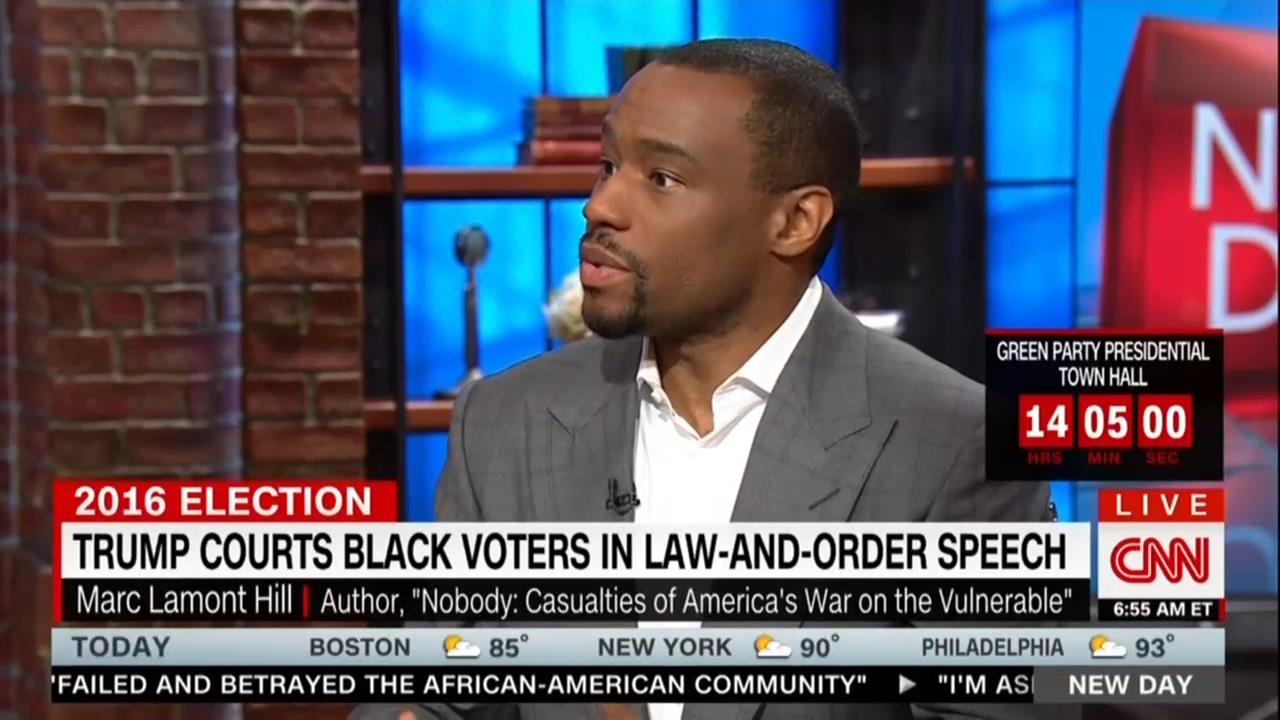 After Cuomo brought up a new ABC News/WSJ poll that predicted only one percent of blacks would vote for Trump, he asked Bongino why Trump was unable to make the case to blacks that their Democrat-run communities would only keep them in poverty. Bongino responded:

DAN BONGINO: Yeah, you know, Chris, this is one of the great mysteries of my life. If I was granted omnipotence by the Lord tomorrow to change one thing, it would be to be able to walk into the black community and largely in inner cities and say, please, look at what's happening here. I mean, these communities have been ruled monopolistically by far left big government liberals for decades. In some cases since the '20s and '30s. These communities have been driven into the ground. I mean, you don't have to be a scientist to look at the evidence, the correlational evidence right in front of you. Liberalism correlates with poverty and high crime every single place it's been tried. Yet, you have some members of the black community which support the democratic party, which continues to bankrupt them. I wish I could change it. I wish the Trump campaign could as well.

Marc Lamont Hill took offense to that, wincing then claiming there was “[N]othing far left about Chicago, Baltimore, Philadelphia,” at which Bongino, flabbergasted, asked, “What?”

Lamont Hill explained further, but his answer didn’t really clarify who was responsible for these cities being in poverty:

LAMONT HILL: I'm going to tell you. They're democratic machines but they're not far left. Michael Nutter was the mayor of Philadelphia. No one would call him far left. I think that’s a bit extreme. It's not exactly Cuba there. The other piece of, this and you said you're not a scientist and I’m glad you said that. There's a difference between correlation and causality.

I agree, there's a connection between these very poor places and democratic machines, but being democrat doesn't cause you to be poor, being liberal doesn’t cause you to be poor. There's a bunch of top-down policies that enable this to happen. In a place like Ferguson, for example, the flight of jobs is far more important, the destruction of public housing is far more influential than who's the city councilman or who's the mayor. Although that’s not a black majority. Same thing in Baltimore.  Again, we need a new way out, but the new way out isn't to just crack down on Democrats and bring Republicans in. We need new policies that bring in jobs, that bring in investment, and that change the relationship between police and community. That's not a partisan issue. That’s a much bigger issue.

Where does Lamont Hill think those “policies that enable” poverty come from, from thin air?  They obviously come from the community’s local government….which are run by Democrats, which was Bongino’s point. As a liberal, Lamont Hill could not concede that Democrats had run these cities to the ground though he would admit there was a “connection” between these “very poor places and democratic machines.”

But instead of recognizing the cause for this localized poverty, Lamont Hill argued these communities needed new policies that brought in jobs, investment and improved police-community relations. Apparently he doesn’t realize that conservatives are the ones who believe in small government, job creation, encouraging entrepreneurship and breaking down divisiveness between communities, so bringing in Republican leadership would achieve those exact goals Lamont Hill argued for.