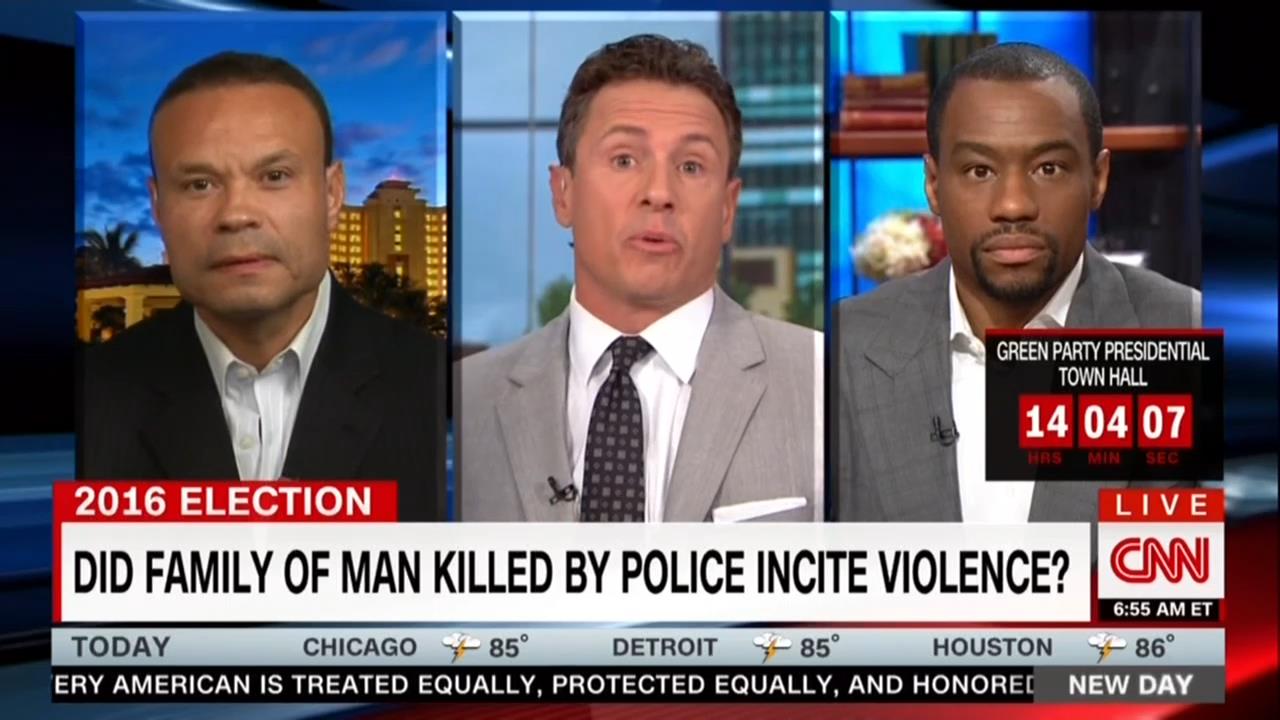 On CNN New Day Wednesday morning, Chris Cuomo brought up the video of Sylville Smith’s sister, calling for violence in the suburbs getting widespread attention, though the initial part of her message calling for nonviolence in their community, was. “That part of the bite was not widely used,” Cuomo said, conveniently leaving out that CNN was the one who left out the rest of the soundbite, initially.

Instead of condemning Smith’s statement, Cuomo began by asking his guests “their take” on the “significance” of the video which had a positive message at the beginning, but ended with Smith saying to take the riots “to the suburbs.”

Cuomo's guests, former Secret Service agent and candidate for congress in Florida Dan Bongino slammed Smith’s call for violence, arguing that she was no “social justice warrior” and shouldn’t have been touted by the media because it started with a “nice comment:”

BONGINO: Yeah, listen, Chris. We view everything in this world on the margin, right. What she said on net was awful. I don't care if she opened up in the beginning with some nice comment about “be better.” Telling people to go bring violence to the suburbs where I live, burn my house down and take violence to my kids, you know, she can go pound sand. Her message was one of hate. It was filled with hate. And on net, I don't really care if she opened it up with a good thing. Charlie Manson may have picked up gum off the sidewalk once in his life. It didn't make him a good guy. You don't call for violence in the suburbs to innocent people and to burn their house down and then get some kind of a pat on the back for being some social justice warrior. I'm sorry. She can go pound sand. Terrible message.

Cuomo then asked Lamont Hill for his analysis of Smith’s statement. Lamont Hill tried to defend the statement, saying it was “a little more complicated than that.”

MARC LAMONT HILL: I think it's a little more complicated than that. I think it was an argument to say, look, why destroy your own community. I think it was less her advocating going and destroying the suburbs and more saying stop destroying your own communities. Often times that’s what happens. But again I agree, the ultimate goal here shouldn't be to destroy anything. It should be to build something. That's what I want to see happen.

Whether the focus of Smith’s statement was on not destroying their own communities or advocating for violence in the suburbs, the point is, she said both in her statement to the media, and both should’ve been reported. Clearly the second half of her statement completely changes the meaning of the whole, and it was irresponsible for CNN to leave out the second half of the statement.

COSTELLO: And I want to take a moment to clarify something from Monday. We had a report that inadvertently and wrongly characterized the plea from a Milwaukee woman whose brother was killed by police. She demanded the violence stop in her community, but in fact, she also said that protests should instead take their violence to the suburbs. I regret that second part of her statement was not included.