Editor’s Note, August 16, 4:02 p.m. Eastern: CNN’s Ana Cabrera issued the following clarification on Twitter for the report below that saw the deceptive and selective editing that she described as “shorthanded”: 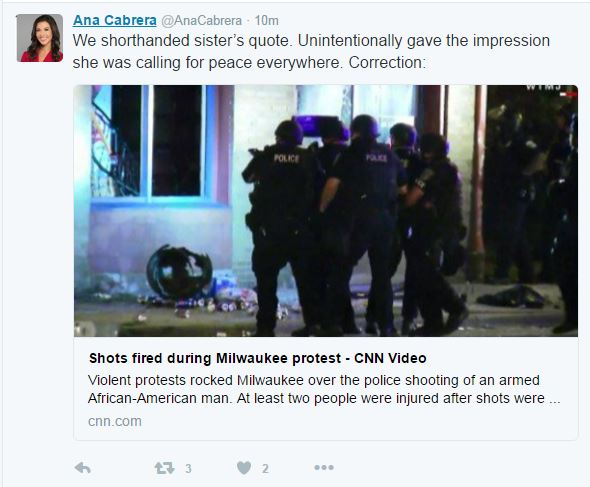 In a classic case of media bias by omission, CNN took extra care Monday to leave out a crucial part of their reports on the Milwaukee police shooting. After a black police officer fatally shot Sylville Smith Sunday, after he refused to put down his gun, riots and violence ensued in the city. Smith’s family was eager to talk to the media and his sister Sherelle had a message that should have been covered and condemned by the media. Instead, CNN decided to air her words but curtail them before they became controversial.

In this video posted by user DeeconX on Twitter, Sherelle Smith can be seen here, in front of several reporters, calling for violence to end...in the city. What she says next is shocking. [language warning]

“Burnin down shit ain’t going to help nothin! Y’all burnin’ down shit we need in our community. Take that shit to the suburbs. Burn that shit down! We need our shit!  We need our weaves. I don’t wear it. But we need it.” 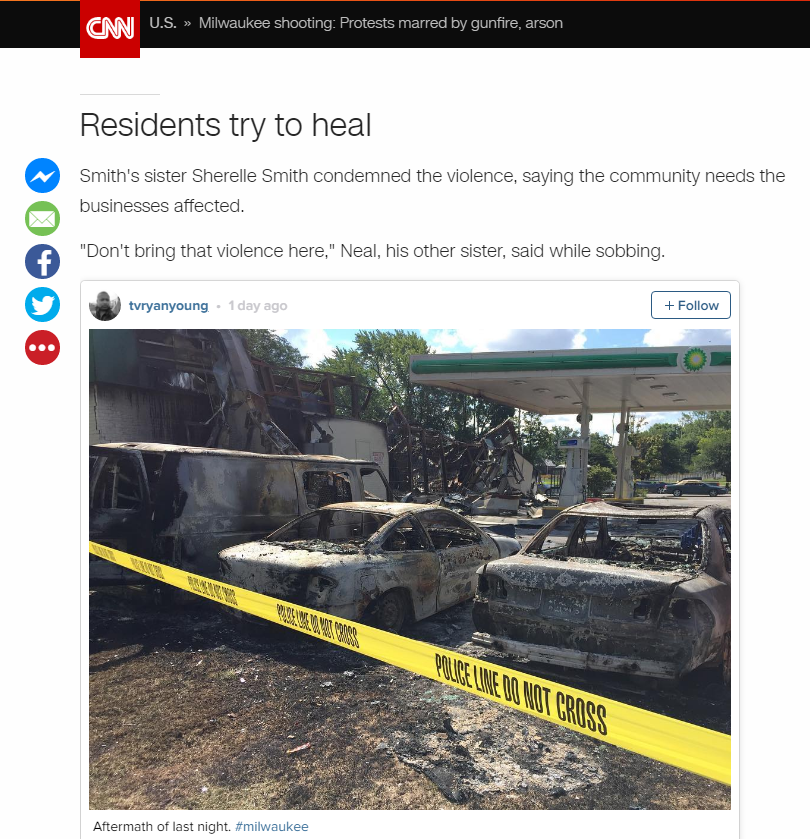 But you wouldn’t guess Smith had said anything of the kind based on CNN’s reporting. Both on their website and televised on CNN Newsroom Monday, CNN described Sherelle Smith as “calling for peace.” They conveniently left out the rest of her message, calling for protesters to burn down the suburbs.

On CNN.com, under the subhead, “Residents try to heal,” the article read:

That was all CNN reported. Again on CNN Newsroom this morning, correspondent Ana Cabrera reported that Sherelle Smith* was “calling for peace,” before playing just a few seconds of Smith’s words that left out the most damning part.

*In CNN video above, CNN’s chyron incorrectly identified Sherelle as Kimberly Neal, another sister of the man shot, who is standing to Sherelle’s right.