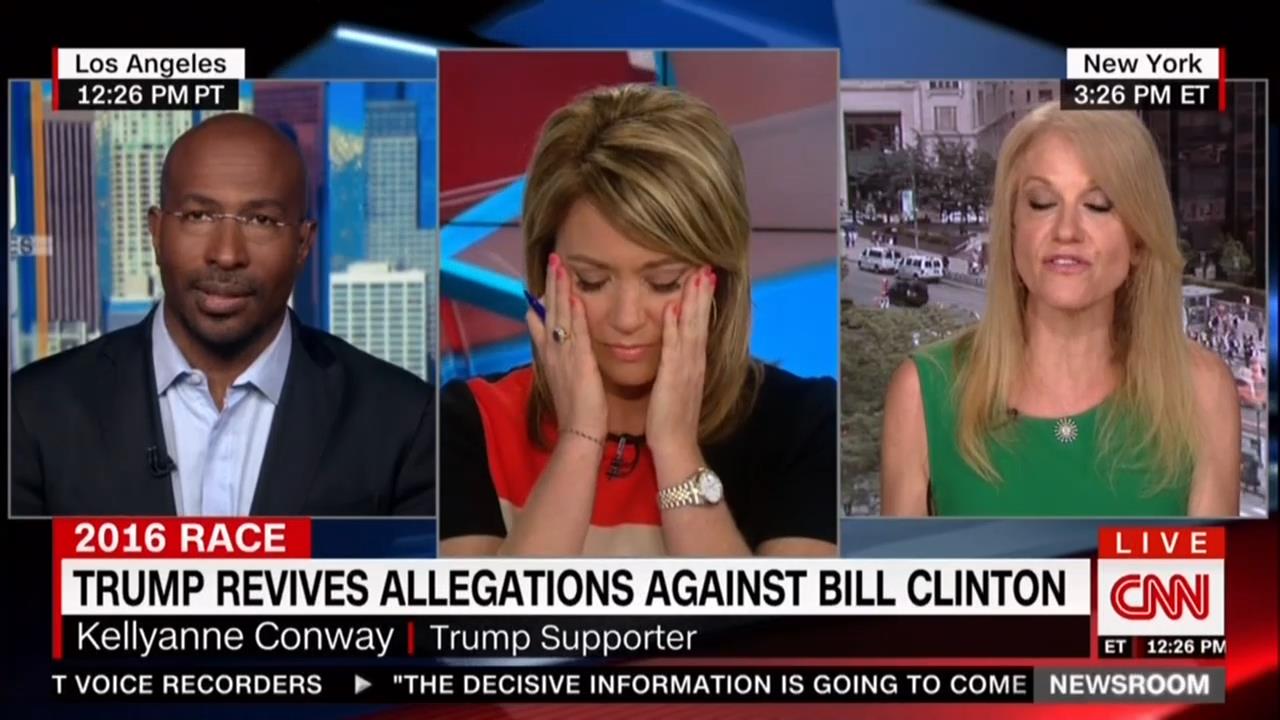 During Tuesday’s primary coverage on CNN, Brooke Baldwin silenced a conservative pundit after she brought up Bill Clinton’s sexual assaults against women. Baldwin brought on liberal commentator and former Obama Administration official Van Jones and Republican strategist Kellyanne Conway to discuss if Trump’s latest attacks against Hillary Clinton as an “enabler” would “backfire” on him. Baldwin touted that Clinton was a victim, and visibly appeared disgusted after Conway brought up Bill Clinton history with women. Finally, Baldwin shushed Conway and wouldn’t let her finish her point, saying, “We’re not airing all this dirty laundry here. I can’t believe we’re going there.”

Baldwin began by bringing up how “popular” Bill Clinton was while he was in office and how much “sympathy” Hillary received while she was in the White House for his affairs, alleging that this line of attack would “backfire on the Trump camp.”

BROOKE BALDWIN:On the -- you know, these continuous attacks from the Trump team, Kellyanne, to you, when you look back to the '90s, you know, after, you know, things happened, Bill Clinton’s popularity went up and really more importantly is this is now about Hillary Clinton, you know, people rallied around her. They were sympathetic to her. Wouldn’t---might this attack, this repeated attack backfire on the Trump camp?

Conway disagreed that Clinton was seen as a “victim” with voters and that Clinton was unpopular with women. When Conway started to talk about Clinton’s unfavorability numbers, Baldwin interrupted and asked Jones to “Please jump in.”

Jones mocked Trump for talking about the Clinton’s family life with his multiple marriages.

VAN JONES: [W]hat is Trump doing talking about anybody's sex life? What's his campaign slogan when it comes to family values? I like my third wife so much I don't have to cheat on this one?

After that Van Jones attempted to build on Baldwin’s sympathy point with more gushing, saying, “Do you know how hard it is to stay married in America? A lot of people are proud of the Clintons for being able to stick it out.”

Conway quickly brought up how there’s a big difference between remarriage and having an affair with a teenage White House intern. This is where Baldwin lost her cool.

CONWAY: But Van, let’s be fair here. There's a difference of having an affair with a White House intern who's a teenager and then marrying three women. You're not being fair here.

Baldwin shook her head in disbelief and put her face in her palms while saying, “Oh my gosh,” at this statement.

After Conway brought up Paula Jones, that was the final straw for the CNN host who unleashed on the Republican strategist.

BALDWIN: We are not airing all this dirty laundry here. I just can't believe we're going there. And it's May and there are five months to go. I think it's going to get really nasty before it's all said and done.

Baldwin has a history of dismissing Republican voices she has own her show, particularly when it comes to their criticisms of Hillary Clinton. In April she shook her head dismissively at the former RNC chair, calling his statements on Clinton simply, “talking points.” Just this last week she again shushed a guest when they brought up Paula Jones saying, “Okay, let’s not go there.”