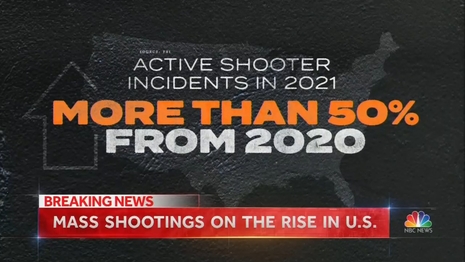 The bodies weren't even cold after the heartbreaking mass shooting in Uvalde, Texas in which eighteen elementary school children and one teacher were killed when NBC Nightly News decided to spread misinformation about the number of mass shootings in the United States this year.

National correspondent Gabe Gutierrez started off the shameful segment by noting that “this is the deadliest school shooting in the U.S. since the Parkland rampage in February of 2018. As has become common now, there are already growing calls to stop gun violence which has been especially brutal this year.”

After summarizing the tragedy in Texas, Gutierrez aired a portion of Senator Chris Murphy’s meltdown on the floor of the United States Senate in which he pleaded for more gun control and aired a soundbite of the parent of Parkland high school victim and radical anti-gun activist Fred Guttenberg.

Despite the statistic being thoroughly debunked by NewsBusters and others, Gutierrez shamelessly repeated the lie that “this year there have been more than 200 mass shootings according to data from the Gun Violence Archive and a new FBI report shows the number of active shooter incidents in the U.S. last year jumped more than 50 percent compared to the year before.”

Despite what NBC and Gabe Gutierrez tell you, there have not been over two hundred mass shootings. As NewsBusters deputy managing editor Nick Fondacaro wrote in April at the link above:

When reports of a “mass shooting” break, the common understanding is that a person went to a public place (school, shopping center, est.) and started shooting indiscriminately with the intent to kill as many as possible. But what the liberal media are currently citing is data from the Gun Violence Archive, a supposed “independent” aggregator of incidents involving guns.

The other common-sense response to NBC’s absurd claim is if there have been that many mass shootings, why hasn’t NBC reported on all of them?

NBC and Gutierrez should be ashamed of themselves for pushing fake statistics hours after eighteen young children have been shot to death.

This vile report by NBC was made possible by Prevagen. Their information is linked.

To read the transcript of this segment click “expand”:

GABE GUTIERREZ: Yeah, that's right, Lester. This is the deadliest school shooting in the U.S. since the Parkland rampage in February of 2018. As has become common now, there are already growing calls to stop gun violence which has been especially brutal this year.

GUTIERREZ: Another crime scene, another earth-shattering act of violence. Another mass shooting in America. This one at an elementary school full of second through fourth graders.

GUTIERREZ: Senator Chris Murphy represents Newtown, Connecticut, the somber site of its own elementary school massacre a decade ago. Fred Guttenberg's daughter was 1 of 17 students and staff killed in 2018 at Marjory Stoneman Douglas high school in Parkland, Florida.

FRED GUTTENBERG: Are we going to watch more kids die or are we gonna do something?

GUTIERREZ: Already this year there have been more than 200 mass shootings according to data from the Gun Violence Archive and a new FBI report shows the number of active shooter incidents in the U.S. last year jumped more than 50 percent compared to the year before. The shooters increasingly choosing soft targets. Just days ago ten people were killed at a supermarket in Buffalo, their funerals still underway. In California, a gunman targeted a church. In the last three years, gunmen have opened fire at a kosher market in New Jersey, a Walmart in El Paso, and a supermarket in Boulder, Colorado. The statistics are clear, but what to do about them is not.

SEN. TED CRUZ: We are seeing way too many of these horrific mass murders, and we need to devote far more law enforcement resources to stopping violent criminals, and preventing these kind of absolute acts of evil.

[cuts back to live]

HOLT: And, Gabe, we spent part of the day together covering this watching it unfold. We've both been to more of these scenes than we care to think about. What went through your mind as you watched those pictures today.

GUTIERREZ: Yeah, Lester. We were on the air as you said when the Governor revealed that death toll, and it was just a gut punch. How many of these shootings have we reported on together over the past decade or so, and, you know, I think back to Columbine, I was just a teenager then but it all felt so unbelievable. How tragic is it that this now feels so common?

HOLT: And some of the conversations that we had after Buffalo, after many of these others we're having again or are being had.

GUTIERREZ: Yeah, that's exactly right, and certainly, a lot of questions in the coming days about what to do, if anything could be done about this. It's always so hard to find out the motive here, Lester.