Is This a Joke? Todd Turns to Sharpton for Comment on Racist Violence 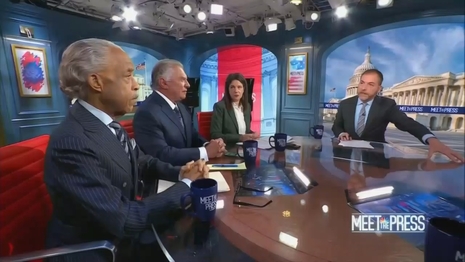 One day after the horrific mass shooting at a grocery store in Buffalo New York, NBC’s Chuck Todd during his panel segment on Meet the Press decided to have Al Sharpton as a guest to give his take on how America can put an end to racial violence.

Despite the fact that Sharpton, as NewsMax national correspondent Logan Ratick pointed out, had instigated both the Crown Heights riot and the Freddy’s Fashion Mart attack, Todd still had him on the show to comment about the mass shooting in Buffalo.

Sharpton, a notorious antisemite and racist, ironically responded to Todd that “we start by changing the tone nationally.”

Later on, Todd told alleged Republican political consultant Al Cardenas that “there is this growing virus and not enough, it feels like not enough leaders on the right call it out. They sort of, there's an appeasement of it to be generous.” To which, he responded with a tirade about how racist his party is for supposedly not condemning David Duke enough, and bemoaned the fact that he thought “there was going to be a move for social justice” after George Floyd died, “yet very little has happened.”

Adding to the insanity, the Washington Post’s White House bureau chief Ashley Parker wailed that because of these mass shootings, gun control is needed despite New York having some of the most strict gun control laws in the country, adding that this “is an area where Congress has been able to do absolutely nothing.”

Ending the unhinged segment, Todd whined “that every time there is an attempt to sort of deal with, particularly deal with domestic terrorism, this white supremacy issue. All of a sudden, there's a whole bunch of Republicans in Congress to start screaming speech.”

USA Today Washington Bureau chief Susan Page responded by suggesting that because some people on the fringes talk about theories like “white replacement”, free speech should be curtailed: “free speech is important. Free speech is not a license to endorse things like replacement theory.”

Chuck Todd bringing on race hustler and riot provoker Al Sharpton to discuss racial-related violence was brought to you by Charles Schwab. Their information is linked.

AL SHARPTON: We start by changing the tone nationally. We cannot just keep going through, as you said to Mayor Brown, you heard the mayor say this before in the government, federal government doesn't do anything. Last night when I started getting calls from our National Action Network chapter in Buffalo what happened, and then I started getting calls from government officials. First thing I said is, president Biden needs to call a summit meeting of black, jewish, Asian leaders, and sit down and talk about the growing problem of hate crimes and that this government will not stand by and allow this to happen. We need to have a tone when young guys like this understand the federal government will come down on them. They're monitoring what's going on and they're not going to tolerate it. He should do this right away. I mean, we've gone from Tree of Life from Charleston to now we're in Buffalo. And we just are putting out regular press releases, rather than dealing with this with the urgency that it requires, and I reached out to ADL head Jonathan Greenblatt and others and said, we ought to jointly go to the white house and deal with this because it is not just blacks, it is Jews, it is Asians, it is LGBTQ, it is hate everywhere.

SHARPTON: Latinos, really Latinos. So it’s hate everywhere. The President needs to preside and say, this can't be tolerated.

TODD: Al, on the far-right, there is this growing virus and not enough, it feels like not enough leaders on the right call it out. They sort of, there's an appeasement of it to be generous.

AL CARDENAS: Listen, there used to be political parties. There used to be serious politicians who would step up and speak out against these kind of things. When David Duke ran for office, hey I spoke out as party chairman, others did. It was well known that he was an individual in his own part of a family.

And now it's to the country, people keep silent and that silence is interpreted in ways that are not healthy. I'll say this. I'm frustrated in America that we're so incapable of doing things. When George Floyd was killed, there were massive demonstrations. I thought there was going to be a move for social justice and very little has happened.

When in Florida, we had Parkland and then we had the mass shooting in a gay dancehall where a nephew of my wife was killed. There's some limited action. But when when you look at this, the frustration in America has to do with the fact horrific things are happening, governments are not doing anything and political leaders are not doing anything and that's what the calamity is.

ASHLEY PARKER: And the other component of this, of course, is guns. The Reverend is right that tone matters incredibly but then you look at how all of these hate crimes are committed, and they're all committed with guns and this is an area where Congress has been able to do absolutely nothing. And then there will be, you saw people you were interviewing talking about sensible gun reform but you look at Sandy Hook, you look at kindergarteners massacred, mother Emmanuel shooting in a church, you look at what happened in Las Vegas, a country music concert. Guns have now touched every aspect of society and congress has been able to do absolutely nothing.

MATT BAI: I mean, we've talked about this. I covered Columbine back in the, when this was new. This is now part of the culture. It's a recurring thing. And Ashley's right. Congress has done absolutely nothing. But you know, to speak what Reverend Al was saying earlier, and we may disagree about this, I can disagree with a lot of people, I don't think this is a more hateful, more racist country than it was 25 years ago, certainly not 50 years ago. I do think we have a segment of our political leadership that has emboldened and legitimized a very extreme and dangerous segment of our political dialogue. And they need to take responsibility for that and culpability for that and it is tied to the violence.

CARDENAS: But Matt, racism has gone from being fringe to mainstream.

TODD: Feels like a political organizing tool at times.

SHARPTON: The problem is it’s been normalized. You have to remember, this is an 18-year-old that is accused in Buffalo. When he was 15, Charlottesville happened. The President of the United States at that time said there are good people or fine people on both sides. So this gives him comfort. That's why Joe Biden, who I believe is a decent and good man, needs to set a different tone and we need to deal with guns because the tone was set while this guy was a kid. Being impressionable. That this is all right to be marching, saying Jews will not replace me. That’s what he saw at 15 years old and he saw it from the White House.

PARKER: And there's something particularly devastating about the fact Joe Biden said he was impelled to run for President because of Charlottesville. And he seemed to mean that sincerely and now you look at what's happening and it feels like nothing has changed. The culture is the exact same.

TODD: It does seem, Matt and Susan, that every time there is an attempt to sort of deal with, particularly deal with domestic terrorism, this white supremacy issue. All of a sudden, there's a whole bunch of Republicans in congress to start screaming speech.

PAGE: Well, free speech is important. Free speech is not a license to endorse things like replacement theory. This terrible, terrible theory that there's elites, many of them Jews trying to replace America with a black and brown nation to dilute the power of white people. That is un-American. What elected official?

BAI: I'm as close to a free speech absolutist as you’re probably gonna find and I really believe that free speech is threatened in a lot of corners of society, but free speech demands leadership and when you have a society that is free, you also have to have a society with leaders who stand up for morality and for the right instincts and the culture. So that you don't take things that are on the margins of the society, as you say, and bring them into the mainstream and legitimize them. We have failed on that count and we continue to fail and these are the consequences.

CARDENAS: Every day, it's every day. You know, immigration is a big deal to me. For immigrant children, babies to be blamed for formula shortage. I mean, come on. We're trying to find hate everywhere we can.

TODD: Absolutely right. And there are people on the right that are intentionally trying to create that divide on that issue too.