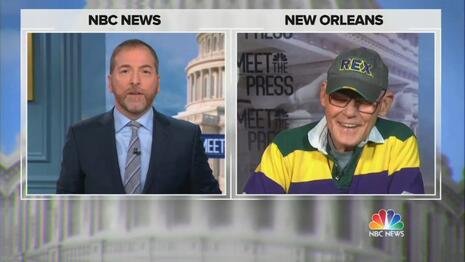 The conversation then briefly drifted toward the ongoing surge of the Omicron variant. This prompted Todd to ask Clyburn, "what's your advice to the President here? And what do you need from the President to improve Democrats' chances in 2022?"

Todd, being a typical Democrat operative disguised as a journalist is obviously concerned about the looming 2022 midterm elections.

In response, Clyburn gave the typical answer that you would expect: Biden should simply stay on message. That was good enough for Todd who then thanked Clyburn for his time and moved on to Clinton loyalist and Democrat Party hack James Carville who he proceeded to gush over:

Joining me now is a familiar face, Democratic strategist James Carville. He's been pretty outspoken about what he thinks Democrats need to do and need to stop doing to stay in power in 2022.

You read that right, Chuck Todd the moderator of Meet the Press is going to discuss with James Carville what the Democrats need to do in order to stay in power. Oh, how far the show has fallen from the days of Martha Rountree's hosting of Meet the Press in the early 1950s.

Todd's first question to Carville was "you have a public that is just in a bad mood." Todd claimed, presumably referring to Biden's 33 percent job approval rating. "You just know they are. Right? COVID, they're in a bad mood. How do you sell the good stuff that you believe he can sell to a country that's not very receptive right now?

Todd's next question was a real doozy too:

You've got a situation right now, the Biden coalition, nobody’s happy. Progressives aren't happy right now with how Build-Back Better’s gone. African American activists are not happy with how voting rights has gone. And if you look at the polling the–honestly the thing that’s cratering the most are independents, you know the folks that just wanted the temperature turned down. You're the President. What do you fix first?

This is a typical question you get from the leftist media, Biden is unpopular because his base is unhappy, in other words, he's not far left enough.

Carville's answer to Todd at the end of the interview was "Soldier on." Meaning keep it up, Joe! You're doing great.

This Democrat Party strategy segment disguised as an interview on Meet the Press was brought to you by CarFax, and Fisher Investments. Their information is linked so you can let them know about the biased news they fund.

To read the relevant transcript of this segment click “expand”:

CHUCK TODD: You are somebody who is pragmatic when it comes to the political landscape. What's your advice to the President here? And what do you need from the President to improve Democrats' chances in 2022?

REP JAMES CLYBURN: I think he's on message. Stay on message. Don't let people get him off message. You know, my father was a fundamentalist minister. He used to say to me all the time, son, the darkest hour of the night is that moment just before dawn. So yes, things may look dark. Keep pressing. When we came out of the 1964 Civil Rights Act, people told us we couldn’t get voting. And we got voting the following year in '65. It may look bleak now, but we are gonna keep pressing. We're not going to give in on this because I'm convinced that the people of goodwill are going to step up and help us get this done.

TODD: Congressman Jim Clyburn, Democrat from South Carolina always appreciate getting your perspective on the show. Thank you, sir.

CLYBURN: Thank you very much for having me.

TODD: Alright, joining me now is a familiar face, Democratic strategist James Carville. He's been pretty outspoken about what he thinks Democrats need to do and need to stop doing to stay in power in 2022. James, welcome back to Meet the Press, sir.

TODD: Let me start with what we're seeing right now. We're about to be at the one-year mark. It's a tough moment for this presidency. And I know you argued 2021 is the greatest story never told. But I'm curious. You have a public that is just in a bad mood. You just know they are. Right? COVID, they're in a bad mood. How do you sell the good stuff that you believe he can sell to a country that's not very receptive right now?

CARVILLE: You gloat and you promote. You talk about the fact that we pretend to care about child poverty although no Congressman I read in the paper ever talks about it. It's the lowest child poverty rate we’ve had in history. We claim that we care about hourly workers. Hourly workers today have more leverage at any time they’ve ever had in my 77 years of existence on this planet. Alright? You talk about we want jobs. 6.4 million jobs. More jobs than any President ever created in the first term. What you do, Chuck, is you run on what you got. You don't run on what you didn't get. And the stuff you got is pretty good. If they don't pass voting rights, if they don't pass Build Back Better, run on that in 2022. All they're gonna run on is the 2020 election returns, or getting Adam Schiff or Jamie Raskin back revenge. So just focus on what you've got, what you’ve done, and what you want to do to make people's lives better. That’s it. You've got to go out and you’ve gotta gloat and you gotta promote. And if inflation is still at 7% in November this year, we'll lose anyway. But I don’t think, a lot of people don't think that's going to be the case.

TODD: You've got a situation right now, the Biden coalition, nobody’s happy. Progressives aren't happy right now with how Build-Back Better’s gone. African American activists are not happy with how voting rights has gone. And if you look at the polling the–honestly the thing that’s cratering the most are independents, you know the folks that just wanted the temperature turned down. You're the President. What do you fix first?

CARVILLE: Well first of all, I agree with my friend Jim Clyburn. There's an expression that I love. It's called soldier on. Alright? And I don't think we have sufficiently -- if you're a part of the Democratic base and you don't care about child poverty, you don't care about hourly workers, then you're really not a Democrat. Alright? Now, I think a lot of the Democratic base has not been told or informed of the things that President Biden and this Congress has accomplished. But to me, those are the things that, if I'm a Democrat, I much more care about that than some word in the dictionary, that children are going to bed with a full stomach and a warm house. I care that somebody hourly worker is not sitting there working away at $7.25 an hour, and I see these signs all over even in Louisiana and south Mississippi, $700 signing bonus. Those are real accomplishments. And it's something you can run on. Again, you don't talk about what you didn't get. That's what these -- Democrats whine too much, Chuck. Quit being a whiney party. And get out there and fight and tell people what you did and tell people the exact truth. The Republican Party stands for nothing other than let’s relitigate the 2020 election, or let’s get back at Jamie Raskin. That’s it. That’s the entire platform.

TODD: Is there something Joe Biden can learn about the experience you helped Bill Clinton get through after '94?

CARVILLE: Soldier on. You know, you had a bad week, but you had a good year. People at the end of the day are going to judge you on your year and not your week. And this is a tough, hard business. And you've got ups and downs. You got–you get bruised. You get beat up, but every President goes through this. I think President Biden had the competitor’s record, on what's been told a huge differential. And I think that they’re trying to sort of doing. I've been talking about infrastructure since Eisenhower built the interstate highway system. We got a trillion dollars' worth of infrastructure coming up. The children that are not living in poverty today are going to ride on better roads, have better broadband, cross better bridges. I mean, this is something we ought to be really proud of as Americans. We ought to talk about it. We ought to brag about it. We ought to tell people about it. If we do those kinds of things, we'll end up with a better outcome. I promise you.