The panelists of Morning Joe continued to push the narrative that the fictional Medicaid "cuts" in the GOP health care bill would devastate the poor on Wednesday. With a brand new chart in tow, former Obama economic advisor, Steve Rattner, explained at length how the nonexistent "cuts" would ruin people at all walks of life, ranging from nursing home residents to the disabled. Co-host Joe Scarborough then went one step further and proceeded to call out those who had the audacity to claim that the bill did not, in fact, actually amount to any real reduction in Medicaid. “It's a talking point,” he brazenly declared,“People that I'm a huge political fan of will go out and say, no, there are no Medicaid cuts. What am I missing?”

“It’s simply another way to cut Medicaid,” Rattner stated in agreement before going on to label the Republican proposal as a “battle-ax” poised at the heart of the government program. Scarborough then followed up on the analogy by proclaiming the bill as being, “a disproportionate whack at one of those three [entitlement programs] and it happens to be the one for the poor.”

The full exchange went as follows:

JOE SCARBOROUGH: It'll devastate the budget Yamiche won’t it? You get rid of the Medicaid expansion then that means a lot of governors in Republican states are going to be scrambling and going to have to make some massive cuts.

YAMICHE ALCINDOR: I mean and that's why you see Republican senators and Republican governors really pushing back on that. They understand that Medicaid is not just funding people's trips to the doctors, but when you put up that chart talking about old versus poor, the people that are benefiting from Medicaid are also old, poor people, so you think about the nursing homes that are going to be kept open in Ohio or in Michigan.

In my trips I've gone to Mississippi where people are saying that that is a central part of how older poor people get there to get their health insurance, so this is a thing that Republicans know is a big problem and as Frank said, The New York Times has put out a pretty comprehensive look at who is hiding from this, there are Republican senators who are essentially hiding from their constituents because they understand that people understand this so well.

STEVE RATTNER: All right, so let's put some flesh around Yamiche’s very good point, and look at what's going to happen to Medicaid under the Republican proposal and how much the cuts would be. Now these are all relative to what otherwise would be spent, we can have that debate. But again these are some new analysis that just came out, and if you go out to 2036, excuse me, you can see what happens to each of these different groups. It's important to remember Medicaid is not just women, poor women, it covers a whole range of things.

64% of nursing home bills are paid by Medicaid, 50% of all child births are paid by Medicaid. 20% of Americans are on Medicaid and so what you can see what happened under this bill is the expansion adults, those who are getting their Medicaid from the Affordable Care Act, these are not the poorest Americans, between 100% of the poverty line and 400% of the poverty line, they are going to lose 53% of their benefits and then if you go up further into other adults, children, into the aged, the nursing home phenomenon, and disabled, you can see that the numbers are not quite as large, but are still very large. And these people as Yamiche eluded to get reimbursed for a lot of services that Medicare does not cover and that they need in order to have a reasonable standard of living.

SCARBOROUGH: Let me ask Bob Costa, we hear from a lot of Republicans that there aren't any Medicaid cuts. It's a talking point. Even people that I'm a huge political fan of will go out and say, no, there are no medicaid cuts. What am I missing?

ROBERT COSTA: I'd like to get Steve's answer to this question, because this is what Republicans are talking about. They want to roll back the Medicaid expansion under the Affordable Care Act and in place of that expansion put in a guarantee, this is the way the bill may pass, a guarantee that if Medicaid costs rise, the funding will rise, along with the cost of medical inflation. Is that -- what does that do to the Medicaid population, Steve, from your analysis if they do that?

RATTNER: You still would not be able to meet the needs of all the Medicaid recipients, because the number of recipients is also growing, so simply raising it by the amount of money from the existing pool and, even that may not be enough, isn't going to do it. It's simply another way, and, in fact, some of those numbers are in what I showed you, it's simply another way to cut Medicaid. Now, look, I will be the first to admit that Medicaid is a very, very fast growing program and probably one that would benefit from a tougher look at some of the ways it's delivered. It may well be cost savings, but simply taking a battle-ax and saying we're going to cut 53% of-- 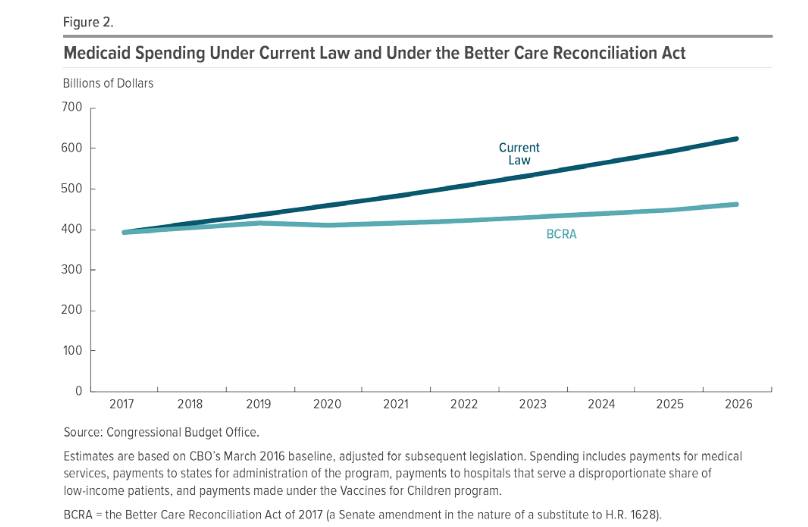 As has been noted previously, the GOP’s proposed “cuts” to Medicaid merely reduces the current rate of spending increases as noted by the CBO report. They do not, in fact, actually amount to the sort of devastation that so many in the media have accused them of being. The only “battle-ax” being wielded here is the one in possession of the media which they are using to rapidly chop away at what little remains of their credibility and reputation.

This biased segment of Morning Joe was brought to you by Bounty, Liberty Mutual, and Purina.