While Donald Trump has been getting a lot of scrutiny for his statement that he would approve of some form of "punishment" for women who obtain abortions, it's equally noteworthy to point out that during the same town hall discussion on the abortion question, MSNBC host Chris Matthews denounced as "fascistic" the regulation of abortion.

Matthews, a cradle Catholic and longtime liberal Democrat, insisted that while he has a moral objection to abortion and he accepts the moral authority of the teaching of the Catholic Church on the matter, that when it comes to the politics of abortion and its place in the law, that's a different matter.

"I think it's a woman's choice," Matthews told Trump.

"So you're against the teachings of your church?" Trump asked.

"I, I believe – I have a view, and a moral view, but I believe we live in a free country, and I don't want to live in a country so fascistic that it can stop a person from making that decision," Matthews answered, adding, "That would be so invasive, so determined [sic; he meant "detrimental"?] of a society, that I wouldn't be familiar with, and Donald Trump, you wouldn't be familiar with a society like that."

So, it seems, to Matthews and countless liberals like him, forbidding the taking of an unborn human life is "fascistic" and invasive, but requiring every American under penalty of law to buy health insurance or face a fine – and/or jail time, eventually – is a perfectly legitimate exercise of the federal government's power, not "fascistic" or invasive of the privacy of the individual in the least. Or, for instance, on gun rights, where they insist that all kinds of tighter restrictions on gun purchases in no way infringe on the Second Amendment liberties of Americans. 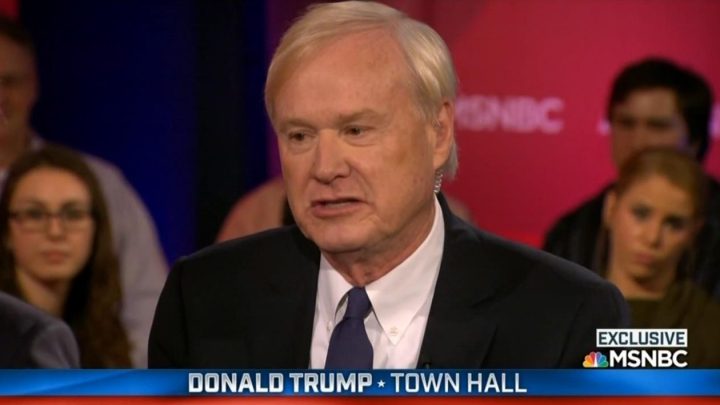 Now, to be fair, Matthews was reacting to Trump's saying he's open to some form of criminal penalty for women who would have abortions, so it is possible Matthews merely meant that that sort of policy set forth in law and enforced by law enforcement officials would be "fascistic."

Of course, for what it's worth, perhaps Chris over the years has been influenced by his wife Kathleen, who is running for the Democratic nomination for the 8th Congressional District in Maryland on a very socially liberal platform, including abortion rights. Indeed, she's received the ringing endorsement of hard-core pro-abortion rights groups like the political action committee EMILY's List.

Here's Kathleen Matthews's stance on the issue, verbatim from her campaign website. You'll notice she seems to leave no room for allowing any form of regulation of abortion whatsoever:

I am a strong pro-choice Democrat who believes that women must have the freedom to make their own healthcare decisions.

The landmark decision of Roe v. Wade ensured that women have the right to decide what happens to their bodies free from governmental legislation. The right for a woman to an abortion is a personal decision that should only be made by the woman through consultation with her friends, family, and medical professionals.

Sadly, numerous legislators disagree with this view and continually attempt to limit a woman’s right to choose. In Congress, I will fight against any effort that comes between a woman and her doctor and argue for strong national legislation to protect a women’s right to choose and equal access to the healthcare services she needs.

DONALD TRUMP: I am pro-life.

TRUMP: And so is the Catholic Church pro-life.

MATTHEWS: Here’s my problem with this: If you don’t have a punishment for abortion – I don't believe in it, of course – people are going to find a way to have an abortion.

MATTHEWS: I don’t believe in punishing anybody for having an abortion.

MATTHEWS: Of course not, I think it’s a woman’s choice.

TRUMP: So you’re against the teachings of your church.

MATTHEWS: I believe – I have a view, and a moral view, but I believe we live in a free country. And I don't want to live in a country so fascistic that it can stop a person from making that decision. That would be so invasive, so determinative [sic] of a society that I wouldn’t be familiar with, and, Donald Trump, you wouldn't be familiar with a society like that.