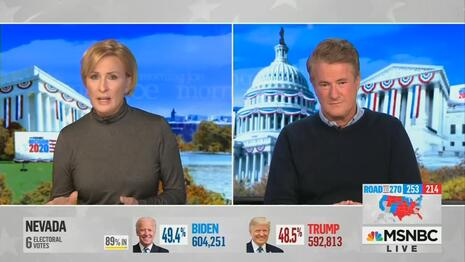 The liberal media have tried to trick Americans for decades, but recently they have been more cavalier about their dishonesty. The censorship of the 2020 Republican National Convention was perhaps the most blatant example of the left-wing networks’ new addiction: cutting live footage they don’t like, and turning the camera to one of their own talking heads to provide their pathetic excuses for doing so.

President Trump’s Thursday night speech alleging voter fraud was the latest target of the left-wing networks’ self-righteous censorship. MSNBC’s Mika Brzezinski, congratulating her colleagues in the partisan press, proclaimed on Friday’s Morning Joe: “All three major networks along with this network cut off the President mid-sentence to shut down his disinformation campaign.”

But Brzezinski didn’t just let viewers take her word for it. Unlike a lot of claims made on Morning Joe, this one was presented with irrefutable evidence. Brzezinski and her production team presented a compilation showing anchors on multiple networks interrupting the feed from the President’s speech.

NBC anchor Lester Holt, treating his viewers like children, interrupted Trump’s speech and arrogantly stated: “We're watching President Trump speaking live from the White House, and we have to interrupt here because the President has made a number of false statements.” CNBC’s Shepard Smith and MSNBC’s Brian Williams had similarly pathetic excuses, with Williams even adding: “[we are] correcting the President of the United States.”

Apparently, we are past the point where news anchors can show viewers what’s happening live and then “fact-check” it afterwards (or even on-screen during the speech while allowing it to continue). They’re now too lazy to even address the statements they don’t like before telling us what to think. It’s easier to just protect us from reality so that their narrative can be the only one we hear.

The talking heads on TV know that too many Americans actually trust them to report the news, and they’re all too happy to take advantage. But the most sickening part is that they’re no longer afraid to brag about it.

Brzezinski’s shameful showcase was made possible, in part, by Overstock. Tell them what you think about this disgrace.

BRZEZINSKI: As we go to break, last night President Trump lied repeatedly from the White House podium in an effort to discredit the 2020 election and American democracy at large. All three major networks along with this network cut off the president mid-sentence to shut down his disinformation campaign.

PRESIDENT DONALD TRUMP: I know that it's supposed to be to the advantage of the Democrats, but in all cases they're so one sided. We were—

LESTER HOLT [NBC]: We're watching President Trump speaking live from the White House, and we have to interrupt here because the President has made a number of false statements.

DAVID MUIR [ABC]: The president talking about observers at the polling sites where they're now counting the ballots across this country. They have been there, Republicans and Democrats.

TRUMP: Likewise in Georgia I won by a lot, a lot. With a lead of over—

NORAH O’DONNELL [CBS]: And there the President of the United States addressing the American people for the first time claiming that ‘if you count the legal votes I easily win.’

TRUMP: That's why they mailed out tens of millions of unsolicited ballots without any verification measures whatsoever—

SHEPARD SMITH [CNBC]: Well, we're interrupting this because what the President of the United States is saying in large part is absolutely untrue.