On Thursday’s CBS This Morning, reporter Nancy Cordes went to bat for “undisputed front-runner” Hillary Clinton and appeared dismayed that the GOP presidential candidates spent so much time talking about her during this week’s debate on Fox Business.

After she touted Clinton’s supposed dominance in the Democratic primary, Cordes played up the Democrat’s response to her Republican opponents who are “locked in a serious debate over immigration after tangling on that issue at their debate on Tuesday night.”

Cordes played a clip of Donald Trump calling for the deportation of 11 million illegal immigrants followed by Jeb Bush’s strong denunciation of such a plan. The CBS reporter then eagerly promoted how “Clinton chimed in on Twitter calling Trump's plan ‘absurd, inhumane and un-American.’”

Cordes continued to spell doom for the GOP over the issue of immigration and used standard liberal talking points to stress that the party has serious problems with Hispanic voters: “It’s a touchy issue for a party that is worried about a repeat of 2012 when Mitt Romney's much milder proposal still turned off Hispanic voters.”

Not to be outdone, Cordes seemed shocked that the Republican presidential candidates repeatedly mentioned Clinton during this week’s debate and made sure to highlight how Clinton’s “campaign mocked them for mentioning her more than the middle class at a debate focused on the economy.”

During the 8:00 hour, CBS continued to mention Hillary’s criticism of the GOP on immigration. Co-host Gayle King explained that “Republican presidential candidates kept on talking about immigration on Wednesday. That controversial issue brought some of the loudest discussion in Tuesday night's debate.” Norah O’Donnell went on to eagerly repeat Cordes’ line that “Democratic front-runner Hillary Clinton went on Twitter to call Trump's plan “absurd and inhumane and un-American.”

CHARLIE ROSE: A CBS News/New York Times poll is out this morning. It shows Hillary Clinton still dominates the Democratic race for president. The nationwide poll among Democrats shows Clinton leading Bernie Standards 52% to 33%. Martin O'Malley is a distant 3rd with 5%. Nancy Cordes is at Drake University in Des Moines, Iowa, where all three candidates will face off at Saturday's CBS News Democratic debate. Nancy good morning.

NANCY CORDES: Good morning. Our new poll also finds that Clinton supporters are more likely to say that they have made up their minds. So she is going to walk onto this debate stage on Saturday night as the undisputed front-runner. Her Republican opponents meanwhile are locked in a serious debate over immigration after tangling on that issue at their debate on Tuesday night.

DONALD TRUMP: You’re going to have a deportation force and you're going to do it humanely.

CORDES: GOP front-runner Donald Trump doubled-down on Wednesday on his vow to deport all 11 million undocumented immigrants. In Iowa, Jeb Bush said that would overwhelm the U.S. judicial system.

JEB BUSH: I think there is a better approach, a practical approach, a conservative approach that solves this and does it in a way that doesn't cost an arm and a leg and the American values.

TRUMP: We are a country of laws. They’re going to have to go out and they will come back. 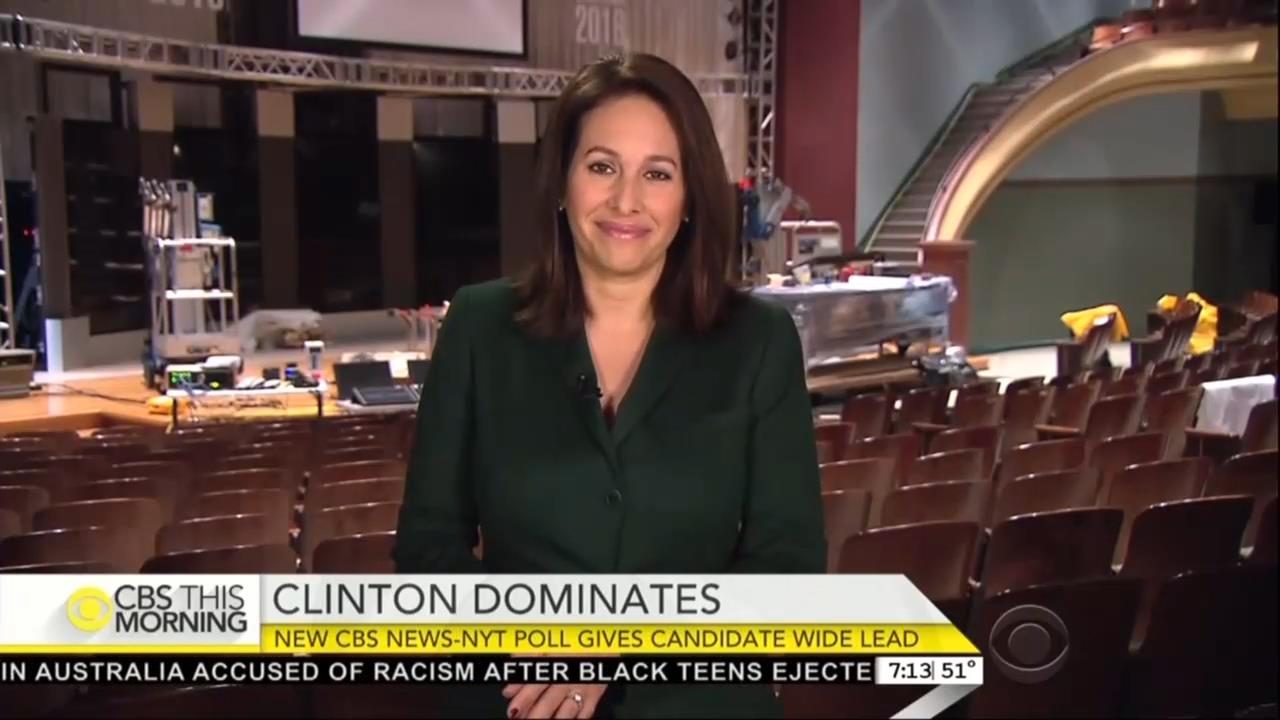 CORDES; It’s a touchy issue for a party that is worried about a repeat of 2012 when Mitt Romney's much milder proposal still turned off Hispanic voters.

MITT ROMNEY: The answer itself deportation which is people decide that they can do better by going home because they can't find work here.

CORDES: When they weren't debating immigration Tuesday, Republicans were talking about Hillary Clinton.

CORDES: In an online video, her campaign mocked them for mentioning her more than the middle class at a debate focused on the economy. Republicans said that is because she is their true rival, not each other. The assault continued on Wednesday.

MARCO RUBIO: We intend to expose her really radical views on abortion.

TED CRUZ: If we just agree with Barack Obama and Hillary Clinton on amnesty, Republicans will lose.

BUSH: I like the fact that I was given the chance to point out the threat of Hillary Clinton's presidency.

CORDES: We have just learned this morning that Clinton's Democratic rival Bernie Sanders has won the endorsement of the Postal Workers Union. It's the largest union to back him so far. And interestingly, Charlie, in our new poll, he leads among Democratic voters under the age of 45. He’s got 46 points to Clinton's 40.