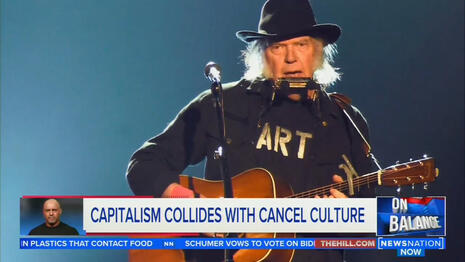 Who knew rocker Neil Young was into censorship?

The one-time rock and roll guy of Buffalo Springfield and  Crosby, Stills, Nash and Young, - he of such legendary hits as “Rockin’ in the Free World” - was typical of 60’s and 70’s rock and roll types, supposedly free and easy. He had no problem with drugs, advertising his use in memoirs. Now pretending there’s no problem with drug use would be decided misinformation.

But out of the blue the other day, Young abruptly turns on Spotify, saying this to his managers:

I want you to let Spotify know immediately TODAY that I want all my music off their platform. They can have Rogan or Young. Not both.

He went on to say this on his blog:

I sincerely hope that other artists and record companies will move off the SPOTIFY platform and stop supporting SPOTIFY’s deadly misinformation about COVID.

Joe Rogan’s sin on his popular podcast? To host an appearance by vaccine scientist Dr. Robert Malone to discuss his views of the Biden-Fauci-led push for every American to be vaccinated.

This enraged rocker Young, thus his tantrum and threat to Spotify, demanding they silence Rogan or he, Young, would pull his music from Spotify.

To their credit, Spotify responded by swiftly dumping - Young. And the irony of an admitted open drug user, which Young has repeatedly written about, complaining that Rogan is pushing misinformation on the vaccine is a hilarious case of not having any sense of self-awareness.

Then there’s Substack, the subscription newsletter that is, as described here by Fox News, “popular among independent journalists and writers.”

The Substack sin also revolves around dissenting views on the vaccine, publishing what has been described in the Fox report as “anti-vaccine newsletters.” For that sin of allowing freedom of speech on its platform, Substack, as with Spotify, is under attack. Fox reports the Substack response this way:

"At Substack, we don’t make moderation decisions based on public pressure or PR considerations," Substack Vice President of Communication Lulu Cheng Meservey began a lengthy Twitter thread on Wednesday. "An important principle for us is defending free expression, even for stuff we personally dislike or disagree with. We understand principles come at a cost."

Meservey tweeted a list of reasons why she's "proud" to "defend free expression, even when it's hard," beginning with wanting a "thriving ecosystem full of fresh and diverse ideas," which she stressed "can’t happen without the freedom to experiment, or even to be wrong."

"People already mistrust institutions, media, and each other. Knowing that dissenting views are being suppressed makes that mistrust worse. Withstanding scrutiny makes truths stronger, not weaker," Meservey wrote. "We made a promise to writers that this is a place they can pursue what they find meaningful, without coddling or controlling. We promised we wouldn’t come between them and their audiences. And we intend to keep our side of the agreement for every writer that keeps theirs."

The mistake here would be to believe that these episodes with Spotify and Substack are about being or not being vaccinated. In fact, the vaccine is but the latest in an ongoing string of episodes that have nothing whatsoever to do with the vaccine - and everything to do with open left-wing threats to free speech.

Long, long before the arrival of COVID, leftists were out there trying to silence the late Rush Limbaugh by bullying and threatening his advertisers. Ditto with similar attacks on Fox primetime hosts Sean Hannity, Laura Ingraham and Tucker Carlson.

Elsewhere it is AT&T-owned Direct TV that has pulled the plug on the conservative One America News Network.

All of which is in line from this news as headlined in The Washington Times by editor Kelly Sadler in February of last year:

Democrats, for the past four years, were absolutely horrified by President Donald J. Trump’s pending authoritarianism and assault on this nation’s First Amendment rights.

The Washington Post lamented: "Trump keeps threatening the freedom of speech." The Atlantic wrote of "Trump’s warped definition of free speech," and USA Today opined: "Trump 2020 plan: New threats to press freedom and trust in media pillars of our democracy."

Now, after winning full control of the legislative branch and the White House, Democrats are wielding their newfound power to limit free speech in ways the former president never dreamed.

Two Democratic members of Congress wrote a letter Monday to the chief executive officers of the country’s largest television providers, bullying them into purging Fox News, Newsmax and One America News Network from their cable lineups on the basis of them promoting "misinformation and conspiracy theories."

Democratic Reps. Anna Eshoo and Jerry McNerney want these cable providers to apply some newfound "moral or ethical principles … related to journalistic integrity," in determining what content they should allow to be disseminated on their platforms.

So in the wake of the attacks on Spotify and Substack (not to mention all the rest) where are all those liberals who were quick to defend free speech and a free press when Trump’s decidedly imaginary assault on both were supposedly getting underway?

They have suddenly gone strangely silent. Or even joined in with the anti-free speech, anti-free press lynch mob. Here, in the latter category, is this recent headline in The Washington Post:

Conspiracy theorists, banned on major social networks, connect with audiences on newsletters and podcasts
Newsletter company Substack is making millions off anti-vaccine content, according to estimates

Got that? When the subject is one The Post objects to - in this case different views on the vaccine - suddenly free speech and a free press are dangerous threats that must be silenced.

Make no mistake. America is involved in a battle royal with leftist censors who are determined to silence any and all views on any and all subjects they don’t like.

Which is why Spotify and Substack should be applauded for having the courage to stand up for the core American principle of free speech and a free press.

Or to put it another way? To borrow from a famous rock star, Spotify and Substack are “Rockin’ in the Free World.”