With Dem-Loving Press, Science Is Whatever Biden Says It Is at the Time 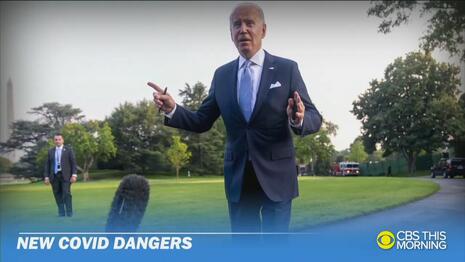 Ya gotta love it.

Biden: 'Get vaccinated or wear a mask until you do

President Joe Biden said if you are fully vaccinated you no longer need to wear a mask, after the CDC updated guidance. Biden urged Americans to get vaccinated and be respectful of those wearing masks.

Over there at The Washington Post in April was this Op-Ed by Dr. Leana Wen. It centered around President Joe Biden’s then-recent speech to a Joint Session of Congress. The headline: "With masks and distancing, Biden’s speech sent the wrong message about the power of our vaccines."

And what, exactly, was that wrong message? The Post Op-Ed by Dr. Wen began this way, bold print for emphasis supplied:

“With his speech before a joint session of Congress on Wednesday night, President Biden missed his biggest opportunity to reduce vaccine hesitancy.

The problem wasn’t the content of his speech — it was the setting.

The 200 attendees entered the 1,600-person-capacity House chamber spaced apart and wearing masks. Some appeared to be double-masked. They were asked not to make physical contact, though some still fist-bumped or shook hands. There were markers indicating which seats could be occupied, with numerous empty spaces in between. As the president spoke, the vice president and speaker of the House sat behind him, both clad in masks.

If I didn’t know better, I would have thought this was six months ago, before Americans had access to safe, highly effective vaccines.

…Imagine if Wednesday’s joint session had required that all attendees be fully vaccinated. Those who were not vaccinated were not welcome. But those permitted in could walk into the room, take off their mask, sit next to one another, and listen to a presidential address — just as they did in 2019.

The science shows that could have been done. It would have sent an unequivocal message that vaccines are safe, effective and the key to ending the pandemic. Instead, the American people got a different message, one that could impede the nation’s vaccine progress at a time when we can least afford it.”

Hmmm. Now? In late July? Here’s the headline from The New York Times based on a very big policy change from Biden per the CDC:

Talk about an understatement.

Now The Post was singing an entirely different tune from when it ran Dr. Wen’s op-ed that said that “vaccines are safe, effective and the key to ending the pandemic.” This time around The Post was saying something else entirely, bold print for emphasis supplied:

“Standing maskless in the White House Rose Garden on a sunny May afternoon, President Biden heralded some happy news. “If you’ve been fully vaccinated, you no longer need to wear a mask,” the president declared. “It’s vaxxed or masked.”

Less than three months later, amid rising cases driven by the delta variant and more breakthrough coronavirus infections, Biden was forced this week to back away from that proclamation. The administration issued new guidance Tuesday that encourages fully vaccinated Americans to wear masks indoors in places with substantial infection levels, encompassing more than 60 percent of the nation’s counties.

This new landscape — and, some say, the administration’s less than clear messaging — is complicating Biden’s efforts to show that he is still leading the United States out of the pandemic, his presidency’s central promise.”

Unless one is so thoroughly living in the wonderland that is the liberal media bubble, the media problem here is self-evident. Namely, the liberal media has a bias to take the word of the liberal president —  and just run with it.  As long as Biden - and decidedly not Trump - is president? Then Americans can be assured per the Biden allies in the media that what Joe Biden says about the vaccines is golden —  it can be taken to the bank.

So when Biden said “If you’ve been fully vaccinated, you no longer need to wear a mask. It’s vaxxed or masked,” his friends in the liberal media simply nodded and ran with the message. Now? Now they are burned, their credibility once again back in the dumpster. They allowed for no caution, and no skeptical “follow the science” scientific inquiry. They simply swallowed what Biden had to say without question —  and now they have to walk it back.

Look. This story isn’t about vaccines and masks. The real story here is the liberal media’s innate left-wing bias led them —  yet again —  into believing something was so, simply because a liberal president said it was so. Then, when the story turns out to not be as presented, they are caught red-faced.

The New York Post, no fans of Biden or the liberal media, accurately summarized this problem in a Friday lede editorial from the paper’s editorial board. It headlined this about CDC boss Dr. Rochelle Walensky: "It’s time to take CDC chief Rochelle Walensky off the air."

“Then there’s the CDC’s foolish about-face on masking for the vaccinated: Even if it were better qualified, the message all too many Americans get is that the agency’s advisories are arbitrary and senseless — or, worse, that it has lost confidence in the vaccines to protect us right now.”

The simple fact here is that the line of communication goes from Dr. Walensky to President Biden to the mainstream media, sometimes actually leaving the President out entirely, with Walensky communicating directly with the media.

And the media lap it all up. Totally not understanding that, not only as The Post says - that the “message all too many Americans get is that the agency’s advisories are arbitrary and senseless” - but that as a corollary millions of Americans already not trusting of the media believe that what the country is being told by that media on vaccines and masks is “arbitrary and senseless.”

Bad enough that the media is not trusted on a smorgasbord of political issues of the day. But to damage that trust when it comes to getting the facts —  the science — right on life-or-death issues like a vaccine?

Not good at all.