End of an Era: The Rush Limbaugh Show Shuts Down 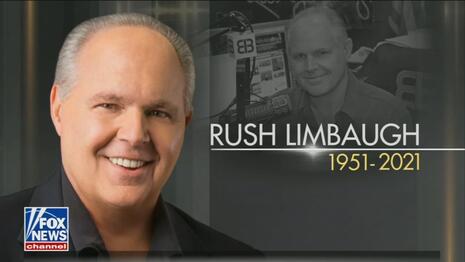 And so it ends.

As it happened, it fell to my local Harrisburg radio host, WHP’s Ken Matthews, to be the last “guide” host that had shepherded the show since Rush departed to give back the talent he had on loan from God.

The realization that Rush’s show - which had continued since his death with guide hosts and taped Rush playbacks on various topics - was now, in fact, irretrievably over and never to return was both poignant and a tad unnerving for his fans.

The Rush era was, in fact, truly over for once and for all and for good. What began almost a full 33 years ago and had quickly become an American institution was, as all things must, turning to memory.

The good news is that, as also with all things, Rush left a legacy. And that legacy is that a new chapter in conservative talk radio begins. Buck Sexton and Clay Travis will fill the Rush slot, although, as they are doubtless the first to recognize, not his shoes.

But one last time, as the Rush Limbaugh show officially ends it is a moment to reflect on Rush and what he created and now has left behind - and his contributions to this new chapter.

The mere fact that Harrisburg’s Ken Matthews was there to close down Rush’s show is a serious testament to what Rush created in the first place. Once upon a time there was no talk radio. Sure there were radio hosts here and there across what Rush called “the fruited plains.” But there was nothing remotely like the talk radio institution that Rush’s success would spawn. In today’s post-Rush world it would be almost impossible to roll into an American city of any size and not find one or more local conservative talk radio shows like Ken’s or those of his fellow “Rush guide” local hosts - Charlotte’s Brett Winterble, Seattle’s Todd Herman, or Minnesota’s Jason Lewis. Not to mention finding the presence of Hannity, Mark Levin, Glenn Beck or some other national host.

Then there’s Fox News. For awhile after Rush had burst onto the radio scene his great friend Roger Ailes built a CNBC television show around him. But as Rush frequently later said, Rush was not a TV guy. Too many people, too many endless complications to produce a show, so he retreated to radio - what he did best.

But Roger Ailes, he who had begun as a young TV producer for the-then indomitable Mike Douglas TV show, was indisputably a TV guy. And with a considerable TV background behind him and the support of Rupert Murdoch, Ailes created an entire Rush-style conservative television network. With Fox News soon being the undisputed leader of cable news. Or, as it were, the Rush Limbaugh of television networks. Not to mention that there are now blossoming other successful conservative TV networks like Newsmax and One America News.

All of this - local conservative talk radio hosts, national talk radio conservative hosts, and conservative television networks are a monumental legacy. While it’s always wise to never say never, it is hard to imagine any other media figure having as great an impact on the American scene as Rush Limbaugh.

And thanks to Rush Limbaugh a thousand conservative media flowers can be expected to bloom.